In a few minutes I'm leaving for a doctor's appointment and my stomach and heart are doing cartwheels.

There's nothing wrong with me – well, there's a LOT wrong but that's not the business of my family doctor – maybe something a skilled psychologist might tackle in a couple of lifetimes but that's beside the point.

Nah, I'm just going for a little "female" adjustment. Been through it a zillion times. I should be used to hopping up on that examination table and spreading my legs and saying something pithy like, "Would you like me to hold a flashlight?"

Doesn't matter how many times I go through this, it's still nerve-wracking. I lay there and try not to think about it, but honestly all I can think about is my poor doctor stuck there in my icky spot, surrounded by massive flab, cellulite, age spots and varicose veins. I have to stop myself from apologizing to him.

"Sorry I'm such a gross patient. I really wish I had a glamorous vay-jay-jay for you to inspect."

Cause seriously, the poor bugger, looking at women's hoo-hoos and men's wankers all day. I suppose it might be better for him to inspect young, buff crotches and inner thighs, rather than the bumpy old flab he sees in patients like me. And it must be depressing for him, trying to teach me to be healthy and faced front and square with thighs so ginormous that he can barely squeeze the speculum through.

Needless to say, I'm all worked up and the first thing he's going to want to do is take my blood pressure, which will be off the charts thinking about his poor dear face implanted in my hoo-hoo.

The day Sam wore his morphsuit to school, I worried.

At 4 o'clock his bus rumbled to a stop and my son stepped off. He was still wearing his red morphsuit so I couldn't see the expression on his face, but at least he still had it on. I had fully expected he would change into regular clothes the minute kids started picking on him.

He looked both ways then hop-skipped across the highway, knapsack swinging carelessly from one red hand, sneakers almost dancing up the driveway.

I didn't even get the chance to ask what happened. He stopped mid-driveway and threw his arm up in the air, hand poised for a long-distance high-five.

"I got R-E-S-P-E-C-T," he said with 12-year-old swagger. Then he swivelled his red hips in some kind of weird victory twist and bounced up onto the deck where I sat waiting for him.

"I gather your day went well?" I asked. "Nobody teased you? The teacher didn't make you take it off?"

Sam admitted he was told to take the hood off during class and when he was walking down the halls, but other than that he had it on all day. Apparently he was the coolest kid in school. Absolutely everybody wanted to know where they could buy morphsuits.

Little kids chased him around at recess, asking who he was. He chased them back, staggering around the schoolyard like a big red zombie. "Who did you say you were?" I asked.

When I stop laughing, me and Sam are going to have to have a talk. 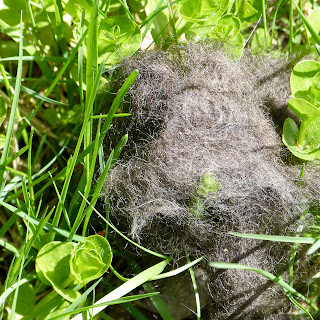 So last week I trimmed the dog. Well, sort of. I tried, if that means anything, although probably not to her. She is mincing around the house looking embarrassed. Can't say I blame her. She looks like Grandma's old fur coat, the one that was accidentally stored in a moth's nest.

When I was done there was a pile of hair bigger than the actual dog. I gathered it up and threw it outside thinking the local robins could use it to build their nests. I imagined it being carried on the wind, like a loved one's last remains over ocean waves, winsome tufts of Misty hair blowing on the breeze, but it merely fell to the grass in sodden clumps.

Perhaps the rain was to blame.

That was then. Today I was hanging out the laundry and I glanced down at the clumps of dog hair, still lying exactly where they had been unceremoniously dumped a week ago.

"That's disgusting," I said to myself, pretending someone else had dumped dog hair on the front lawn. "I wonder what kind of an idjit would do a thing like that?"

Written in the dog hair, as clear as any picture of Jesus on any wall of any Tim Horton's, was the word dog.

What does this mean? Is it a message? Is "Somebody" trying to tell me something? Did you know God is dog spelled backwards? Maybe I should call someone ... like the National Enquirer ... or the Pope.

I've always laughed at the weird places people see images of Jesus. There's a good link here on Momlogic and a pretty horrifying group of photos (including a close-up of a dog's butt) on  The Frisky. But I googled "dog written in dog hair" and came up with bupkis.

The Man in Red 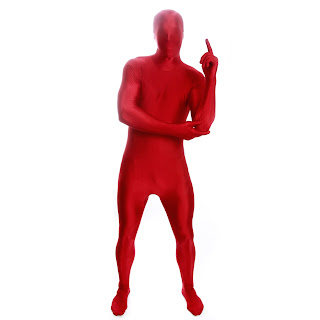 He's so brave. Twelve years old, standing at the side of the busy highway, waiting for his school bus. Red from head to toes.

Sam looks like an alien. A martian who wears headphones, sneakers and a backpack. Underneath the typical schoolyard paraphernalia he's wearing a red Morphsuit. Don't worry if you've never heard of Morphsuits. I hadn't heard of them either until Sam began saying his young life would be meaningless without one.

"What do you do with a Morphsuit?" I asked.

"You run around and stuff," Sam replied. "Oh I HAVE to have one. HAVE to. Puhleeese???"

You can imagine the drama. But can you imagine the suit? Picture yourself wearing pantyhose over your head and you get the idea. It's a one-piece, flimsy, body-hugging suit that I wouldn't wear for all the tea in China. I said to my kids yesterday that, if I had a white one, I'd look like the Michelin Man.

On Sam it's not so bad. He's skinny as a rake and the suit does show off his cute little rear end. And frankly I don't care if he wears it around home all day long but he insisted on wearing it to school today. I told him it wasn't a good idea. Kids would tease him. The teacher might give him grief. I mean, you know school these days – it's hard enough surviving the chalkboard jungle  without wearing a skintight red suit.

I gave him all the pros and cons (mostly cons) but let him make his own decision.

So there he stands, waiting for the bus. He's excited, I can tell, bouncing up on his toes, neon red head turned towards the hill over which the school bus will come. He hears the bus coming, turns out and waves a red hand at me and yells, "Love you!"

He nods. The bus slows to a rumbly stop. The safety arm comes out, Sam's red head looks both ways and he crosses the road.

It's an hour later I can't help wonder how his day is going. Are the kids laughing with him or at him? Is he still wearing the suit? I made him pack other clothes just in case.

I have a lot of things to do today and I should get doing them. Instead, I sip on my cold coffee and think about my favourite martian. My brave little alien. My man in red.
Posted by Cathy Olliffe-Webster at 8:59 AM 19 comments: