Pissed off about religion 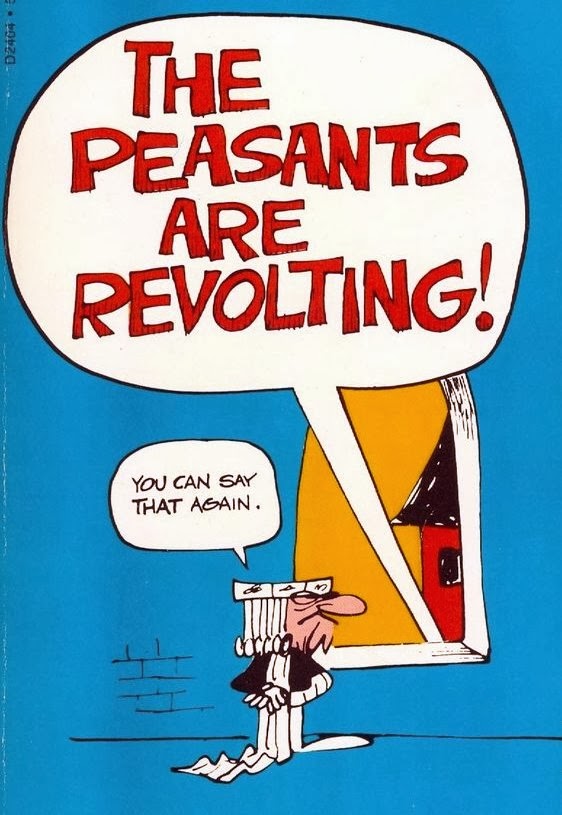 I don't often write about religion because it's one of those topics we're not supposed to discuss, but I am fuming about religion right now. Fuming! And I have to say what's on my mind or I fear I am going to burst.

I just wrote this on Facebook, in a flurry of anger, and decided to put it here, too, with a little explanation:

"I am sick to death of bigotry and hatred spewed from the mouths of so-called righteous people. The so-called religious freedom bill in Arizona fills me with wrath. Why is it the religious right is so outspoken when open-minded people keep silent? It's time to stop using God as an excuse to put down people who are different from yourself. Just because you are a Christian or a Muslim or a Jew or whatever, does not make you any better than anyone else. I am merely a peasant, but this peasant is revolting."

The impetus behind my anger is the so-called religious freedom bill in Arizona – that will likely get squashed, thank goodness – that would permit bigoted assholes from serving homosexuals and other folks they don't deem worthy. What kind of screwed up society, in this day and age, would allow that kind of shit? It's no better than the way white Americans treated black Americans back in the 1950s. It's no better than Germany forbidding Jews from visiting art galleries before the Second World War.

This hatred, in my opinion, all stems from religion. When people Believe, their tendency is to believe they're the only ones who are going to heaven and all the rest of us are going the other direction. Worse, the most rabid believers think it's OK to rid the world of us sinners, because we're not really people. Examples? Let's talk about Hitler systematically ridding Germany of Jews. Or genocide in Rwanda. Or slave traders in Louisiana. In fact, if you look at every war and every atrocity in the history of mankind, religion is at the root of it. Religion permits female circumcision, where women are mutilated and murdered. Religion forces women to cover themselves head to foot in burkas. Religion is an excuse for men to treat women like chattel and, in some countries, to murder them if they so much as look the wrong way.

We think we're better than that in North America. I beg to disagree. Not with the way people continue to bully the downtrodden.

If your religion makes it OK to hurt another person, it's time to get a new religion.

I'm reading a book right now called God Is Not Great: How Religion Poisons Everything. Point by point it illuminates how religion is used to keep people down. It's probably one of the best books I've ever read.

I feel like I'm strangling on religion in some ways. I've met a lot of Christian people since I moved to Cold Lake and we often talk about religion. My best friend is a minister and we talk about religion, too. And then there's all the self-righteous crap I see on Facebook all the time. The other day, in a fit of anger, I Googled "are religious people deluded?" because I needed to know, and I came up with this book. Reading it is a breath of fresh air. It expresses all my fears about religion, and why I think religion is a dangerous thing.

I don't want to hurt anybody's feelings on this topic. Like I said, I've met some wonderful people in Cold Lake who are deeply religious, but I cannot reconcile some of the things that are done or said in the name of religion around the world.

It sickens me, and it needs to stop.

Starting a new job – for me – is a lot like going on vacation. Although, as I write that, it occurs to me that work is an anti-vacation, since there are no beaches and banana daiquiris involved.

Whenever I go on vacation, I do laundry. Rabidly. There is so much foam dripping off my bottom lip that there is no need to add Tide to the wash cycle.  I do laundry like it's the end of the world, laundry-wise, that there will never be another chance to wash Dave's delicates, and so I wash with abject fear in my heart that all his delicates will soon be crusties.

So I took a job. Haven't had a job since last May.

I have vague recollections of putting dish soap in the staff room dishwasher, but otherwise I believe I have forgotten how to be employed.

This is a cool job – not that I'm dissing Walmart (although I guess I am), but my job is way cooler than Walmart. I'm going to be doing social media stuff for a local car dealership. Blogging, tweeting, facebooking, linked in-ing, stuff like that. I have to check and see if Candy Crushing is on my agenda. Wouldn't that be awesome? Crushing jellies and getting paid for it? (To my new boss: KIDDING!)

At any rate, starting my anti-vacation has led me to become intimately connected with the washing machine, the Swiffer and all other things household-ish. The thing I want to tell you about, the really big thing, the thing that brought me here today in the first place, is my new Ultimate Spinning Mop and Bucket.

This thing actually makes floor washing fun. OK, so no, it doesn't. But it does make it EASIER.

You put your water and cleaning solution in, dunk in the mop, spin it around to get it all soapy, then lift it up with one smooth motion and spin it again to get excess water out. So easy you could get your husband to do it, I swear. Plus it's a "gadget" and everyone knows men love gadgets even more than they love us.

As far as I know you can only get the Ultimate Spinning Mop and Bucket at Home Hardware in Canada, but I've googled it and apparently there are similar gadgets at other places all over the world, even on Amazon.

Now excuse me while I go to the store to buy new underwear, because everyone knows you can't start an anti-vacation without fresh gotch.

P.S. How about those Olympics, eh? Go Canada!
Posted by Cathy Olliffe-Webster at 4:30 PM 25 comments:

Nekkid on the internet 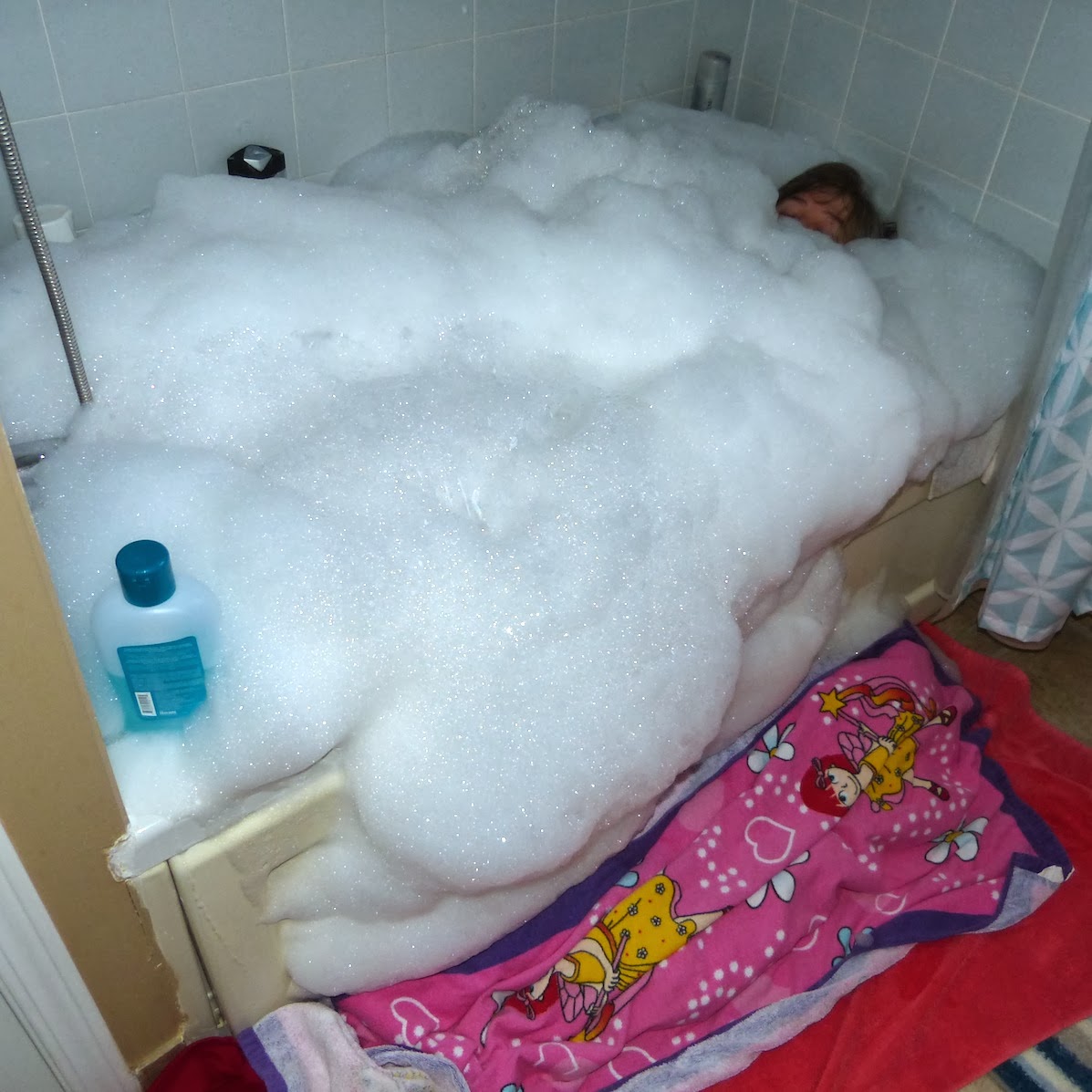 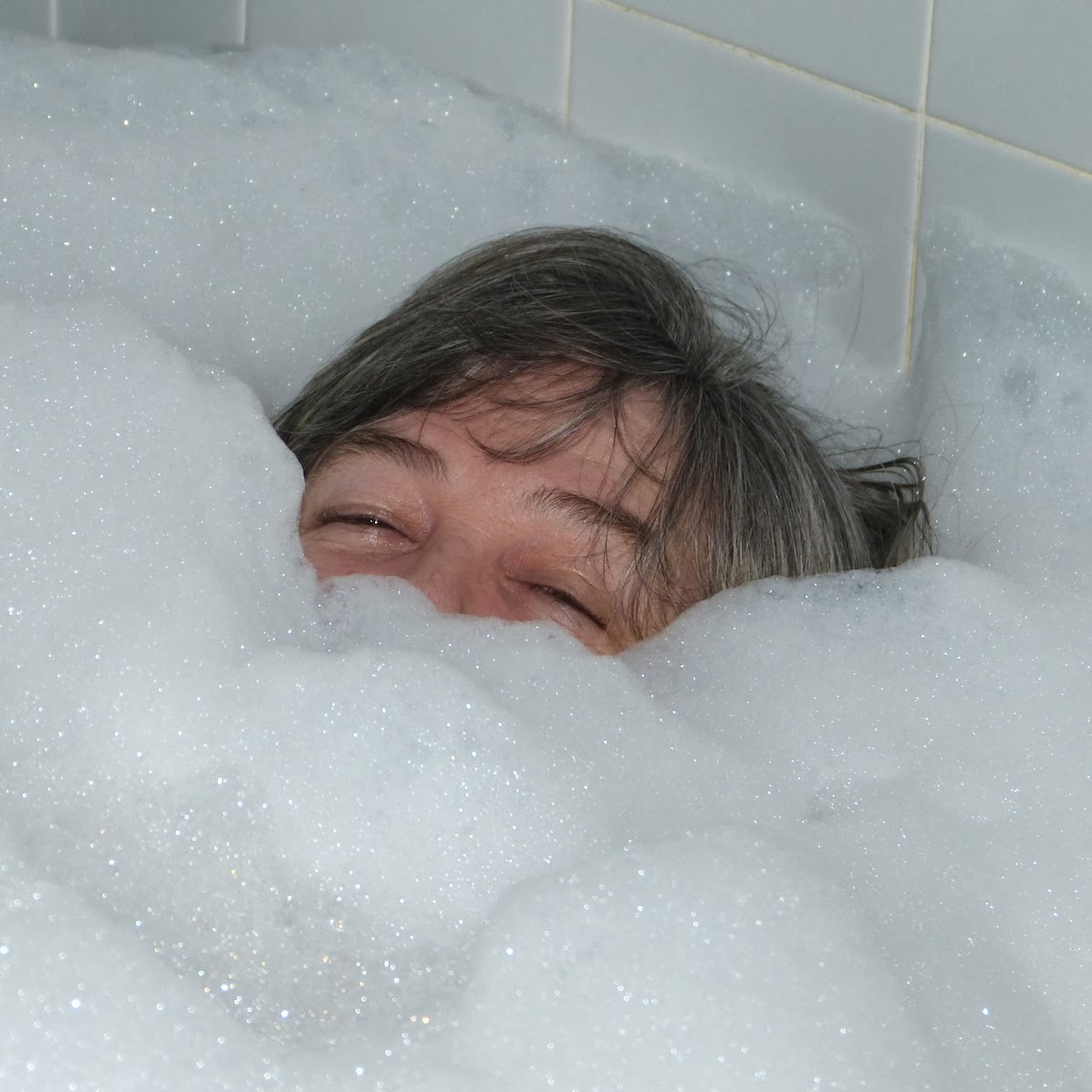 I think I used too much bubble bath.
Posted by Cathy Olliffe-Webster at 12:21 PM 19 comments: 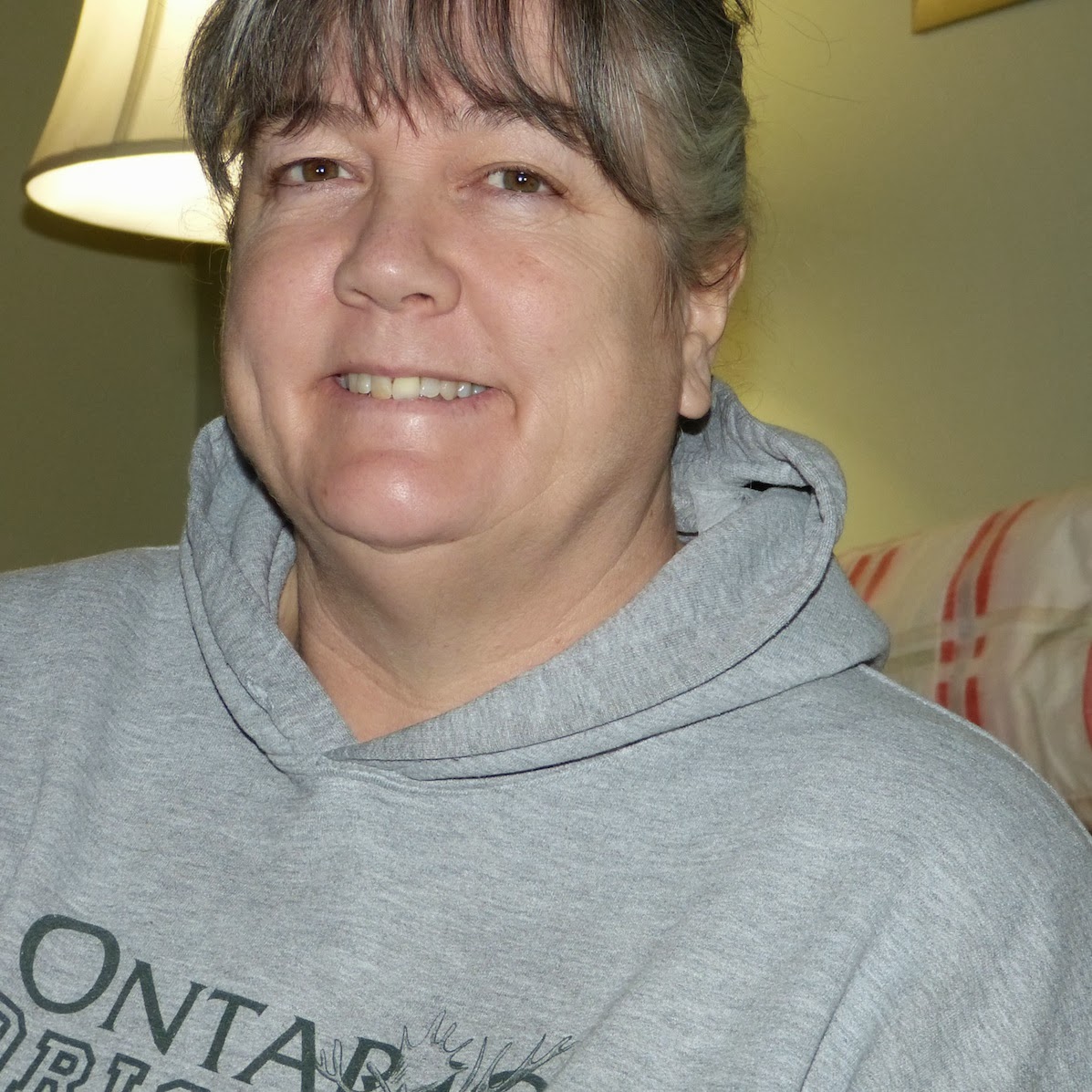 MY HAIR IS FINALLY LONG ENOUGH FOR A PONYTAIL!

Hey, that's big news, at least for me! It was a year-and-a-bit ago that I decided to cut off all my hair. I was sick and tired of dying it. Two seconds after the dye job, I had white roots. Ninety per cent of the time I looked like a skunk. As I got older, the dark dye I was used to using seemed too harsh against my madonna-like face. So I tried blonde, and that was just plain ridiculous. I looked like a truck stop hooker, seriously, and then the bleach over-processed my hair to the point that it broke and fell off in a big chunk. I had a bald spot on the side of my head the size of a hockey puck.

That, I thought, was freaking it. I went to the hairdresser and asked her to cut all my long hair off. All of it! I wanted to start fresh. It actually took a few military-short cuts to get rid of the dyed stuff. The last haircut I had was a year ago. Haven't had as much as a trim since. The only thing I did was cut my bangs. Saved a ton of money. No cuts. No boxes of dye. And it was liberating!

Finally, a year later, my hair is long enough for a ponytail. In another year it'll be hanging down my back and I'll be able to braid it and be that independent grey-haired woman you see in grocery stores sometimes, and envy her funky style.

All in all I'm happy with the decision to go grey. On the negative side, it definitely makes me look older, but since I'm not caught up with the ridiculous quest to be 25 for the rest of my life, that's fine with me. On the plus side, the colour is much prettier – softer – against my skin. My hair is stronger because I'm not dousing it with chemicals, and the salt and pepper look I have going on gives me beautiful streaks. Women pay lots of coin for streaks from the salon, but mine are FREE!

Sometimes, like when a friend gets a particularly great haircut and colour, or I see an actress my age with gorgeous coloured hair, I feel that temptation to cruise the Clairol aisle. It's kinda like the itch I get after I've had a few drinks and somebody lights up a cigarette – the urge never fully goes away. Don't forget, there's a ton of pressure on women these days to colour their hair. Everybody my age seems to be doing it. You hardly see any grey heads on 40 and 50 year olds. Even sixty-plus women are dying their hair in numbers like never before.

People can do what they want, of course but, for me, embracing my grey hair is a powerful and lovely thing. 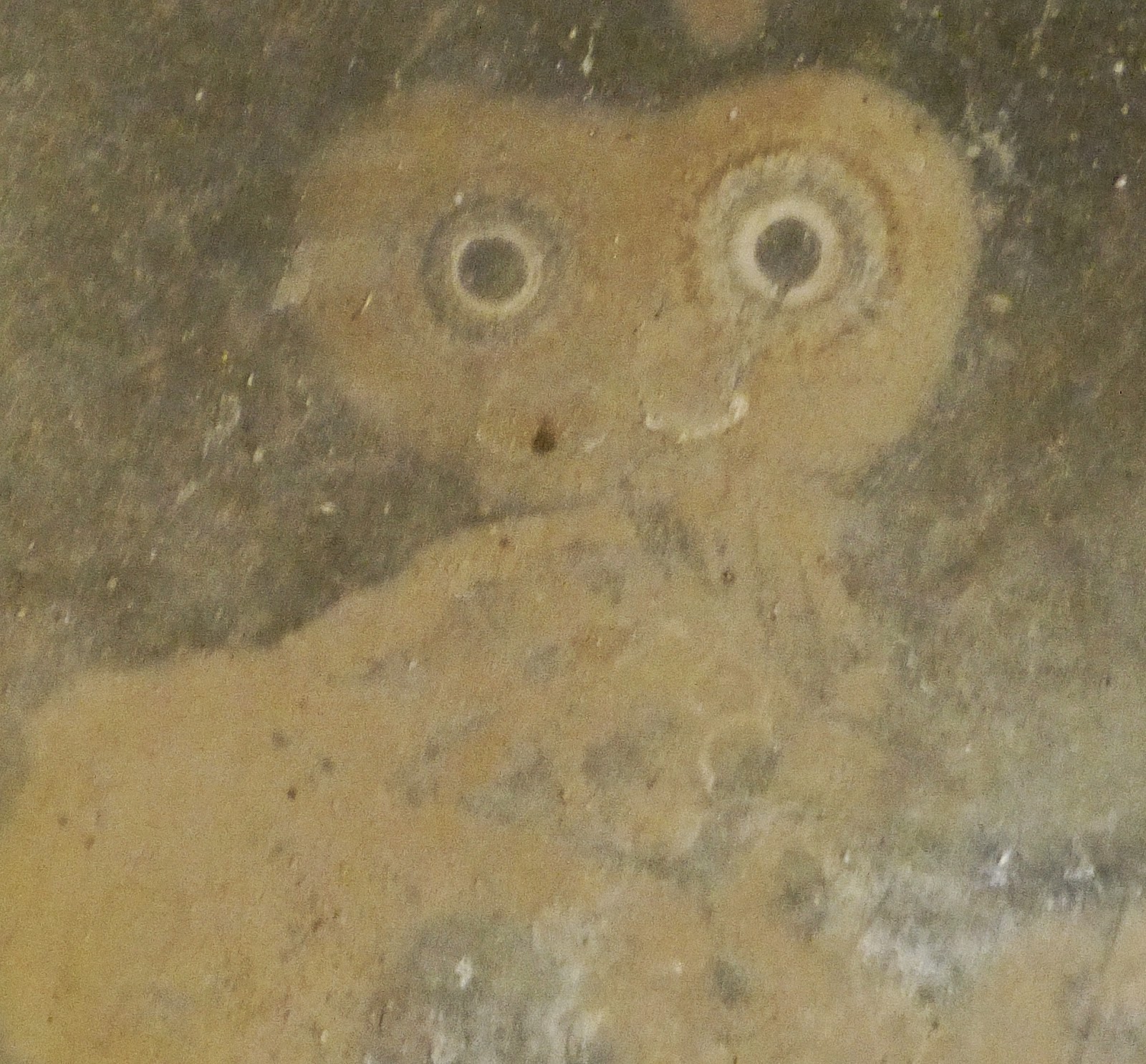 OK, so it's not Jesus on the wall at Tim Horton's, but doesn't this dirt spot on our garage floor look familiar? It's just dirt on concrete and the "eyeballs" were created by ice and snow melting off the Jeep. Still, when E.T. got the call to go home, I had no idea he was headed for Cold Lake.
Posted by Cathy Olliffe-Webster at 3:09 PM 26 comments: 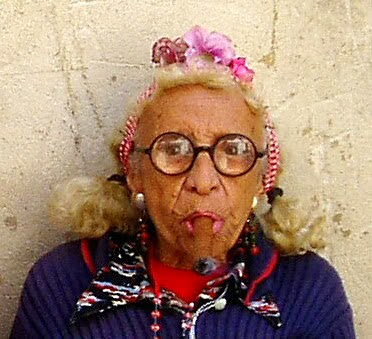 Even though I'm getting those insanely attractive vertical upper lip wrinkles, the ones that make me look like an aging cougar who discovered tobacco when she was three and has been smoking roll-your-own fatties ever since, I am reluctant to smear them with beauty grease. I heartily suspect the moisturizer is actually a fast-acting fertilizer that is making my lip hair grow faster.