I'M NOT A big-time book reviewer; I just know what I like. So if you’re looking for a breakdown and analysis of G.P. Ching’s The Soulkeepers, you just ain’t getting it here.
I did study English and Advanced English and Literature-Out-The-Wazoo-101 about a million years ago but I was young, then, and willing to speculate on sentence structure and now I’m just a weezly old curmudgeon who reads what she wants to read and screw the rest.
(Cue cackling laughter.) Dad-gummit, this is a good book.
I bought the thing for two reasons: I like the way G.P. Ching writes her Friday Flash stories over there on her blog, So, Write. She has a way around the keyboard, does G.P. The other reason is she was touting The Soulkeepers as a YA novel (that’s Young Adult for those not in the know) so I bought a Kindle copy for my sons who are 10 and 14 and may not always conduct themselves as young adults but still, technically, fit directly into that category. 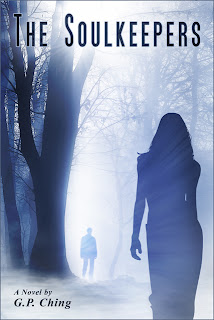 I’m always trying to draw their attention away from video games towards reading and sometimes it’s a struggle. The good news is, Sam, my 10-year-old, dove into The Soulkeepers straight away. His nose was buried in it. And that’s no wonder, really. Unlike most YA novels whose main characters are girls, the star of this book is a teenaged boy, Jacob Lau, who starts out dead.
Yup, dead.
Deader than a proverbial doornail. The first line is, “Death lived up to Jacob’s expectations.”
Whoa! Talk about your magnificent opening lines! G,P.’s writerly skills grab you by the shorts with this sentence and shake you and say, “You better hang on for this ride because it’s gonna be a lulu.”
Of course he gets resuscitated, and that’s a good thing because he’s a feisty character and a nice guy, plus he’s high on the cute scale so you don’t honestly want to see him dead for an entire novel.
No, dead wouldn’t be good for long, not when you have to search for your missing mother, who may or may not have secret ninja-like fighting abilities; not when you have a job with an otherworldly neighbour who grows plants that smell like corpses; definitely not when you have bullies willing to pound you out; or when the hottest girl in school is chasing you around even though you have a fabulous girlfriend; or when the battle between Good and Evil will be won or lost depending on you.
By the way, I fell in love with Malini Gupta, Jacob's girlfriend. She is an exotic flower in a small, whitebread town, but she’s no wallflower. She holds her own with the best of them and, as Jacob meets and falls head over heels with her, so too does the reader. There’s a romantic scene about halfway through that literally brings tears to my eyes, so beautifully is it written.
My son, Sam, who still doesn’t think much of romance, was a little icked out on this point, but that’s because he’s at the bottom of the YA age range. (And thank gawd that he still finds girls icky, for now. Let him take his time with 10; he’ll be 50 soon enough.)

At some point Sam put the book down for a minute and I scooped it up. I wanted to see for myself what had him so interested.
Well, that was it. Sam never got it back. Those pesky Soulkeepers stole my readerly soul and towed me right through to the end. Breathlessly I skimmed through the pages, desperate to know what happened next. As I was driving home from work, or doing the dishes, my thoughts wandered to The Soulkeepers. I don’t actually have a lot of time for reading these days, but I found myself picking up the Kindle at every opportunity. Finally, I stayed up way too late the other night, flying through to the exciting conclusion. Then, being sad that it was over.
See, that’s the sign of a great book – when you can’t wait to get to the end and then you’re sad once you get there.
From what I’ve heard, G.P.’s book is selling like hotcakes and she’s gaining an impressive following of young people enamoured of Jacob and his adventures. She’s already talking about a sequel and I can easily see The Soulkeepers becoming as successful a franchise as the Harry Potter books.
What I love about this book is she doesn’t talk down to young people. Her writing is vintage G.P. – stylish yet clean; the kind of writing that lets you forget you’re in a book, so lost are you in the story. There are also some heavy duty issues lying underneath the plot line – racism and religion are touched on without heavy-handedness. The religious aspects have the same exploratory wonderment that The DaVinci Code has. In fact, I’d even go so far as comparing The Soulkeepers to Dan Brown’s book. Loved both.
You don’t need a kid as an excuse to buy G.P.’s book. Especially when it’s on sale over at Amazon for only 99 cents. (Which is ridiculous – this novel should definitely be higher priced.) But if you do need a kid, well, I’ll rent you mine. He’s not so great at doing dishes, or making his bed, but he is huggable and adorable and perfectly suited for motherly admiration.
Buy it. Read it. Love it.
Posted by Cathy Olliffe-Webster at 6:46 PM