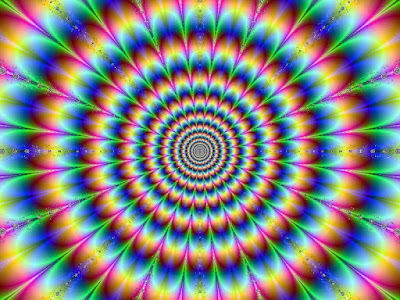 "WHY THEY'RE SUPER-DUPER AWESOME!" I say with a high-beam-voltage, night-skiing kind of stupid-ass grin. Cause there's no point telling people what's really going on. I tried that ... a couple of times. Even with my cockamamie eyeballs I could see their expression gloss over like the meringue on a well-made lemon pie. They don't CARE – they're just asking to be polite. No, seriously, they are.

But then I had someone comment on this blog who was genuinely interested in how my cataract operation fared because she had her cataracts removed and wanted to compare notes. So I'm posting this public service announcement for her sake, and for yours too because, unless you die when you're 54, like me, you're eventually going to get old and get cataracts. Because life sucks that way, in case you hadn't noticed.

The scoop on cataract surgery is thus: if you have to have surgery, pick this one. It's bloodless, it's almost entirely pain-free and it makes an immediate and major improvement in your life. Like, if you have your gall bladder removed, it makes no tangible difference in your lifestyle. You aren't thinner when the anesthetic wears off. You don't hear better. Your boobs certainly aren't bigger. All that's different is you're missing some organ that you didn't use in the first place. It's like the appendix – I have no fecking idea what it does. It's just this lumpish liverish thing that has a free ride in your abdominal cavity, sucking on your blood like some weird internal vampire, until one day it decides it's going to piss you off and hurt like the raging buttocks of Hell. Then you get it chopped out and life continues with no difference except a big fecking scar and the end of the bikini as you knew it.

I had my appendix and gall bladder out at the same time. A two for one deal. The doc promised me I would have an itty-bitty scar. When he took off the band-aid aprés surgery I had a fecking scar from boobs to bellybutton.

Cataract surgery isn't like that. Not nowadays. When my parents had theirs done a few years ago the doctor cut into the whites of their eyes and left big nasty stitches. They don't do that now. With teeny tiny knives they cut into the pupil, I think, and then chop up your lens while it's still inside your eyeball. I know, it sounds gross, but you don't feel a thing. You're all hopped up on drugs and all you can see is pretty lights. It's so psychedelic, man. Like you've just done heroin. Or maybe you have done heroin – who knows what they're shooting into your IV when you're not looking?

Once the lens is chopped up like eyeball sushi they suction it out with a teeny tiny vacuum cleaner. I think my doctor used a Hoover Windtunnel. The reason they do it that way is so they don't have to make a big cut in your eyeball. I know, brilliant, right?

When the old one is out, the eye-doc inserts a new lens that is folded up like a teeny-tiny umbrella. (Everything's teeny-tiny in Eyeball Land.) He pops it open using the magic umbrella button and it sproings into place. He doesn't even have to stitch it. It just sticks there. I don't know how – pressure, I guess. Like shower curtain rods. Or maybe Krazy Glue.

And that's it. End of operation. He sticks a clear plastic pirate shield over your eye and sends you home with a month's supply of eye drops and a pleasant leftover drug buzz that makes you sleepy, happy and dopy.

I was worried about it, I was. Because I am a big poulet. But it was no big deal. I arrived at the hospital, filled out some forms and then the nurses came and inserted an IV and drenched my eyeball with a bathtub load of drops. Some of them froze my eyeball (the drops, not the nurses), some of 'em dilated my pupil, some of them were somebody's used bathwater. Then the eye-doc wrote some graffiti on my eye with a magic marker. He was quite precise about it – said he was measuring stuff. I thought, gee, all this high-tech teeny-tiny stuff and he's writing on my eyeball with a magic marker.

A different nurse gave me one of those gobsmack ugly blue hospital hats to wear and still another one put more freezing drops in my eyes. I was worried she didn't give me enough so I grabbed her arm and hissed, "I NEED MORE." So she gave me more. Because she was afraid.

Then they wheeled me into the operating room and the anesthesiologist asked me how high I'd like to be.

"Gimme everything you got," I said.

He gave me a nice dose of IV bubbly and I was feeling like that time when I had too much rye and was laying flat on my back in an open field watching the stars spin, but then they started duct taping my forehead to the bed and propping open my eyeball with some prop-open-THING and that's when I got scared and yelled, "IT'S NOT ENOUGH."

I remember the anesthesiologist and the rest of the surgical team discussing the matter ... "she had the proper dose".... "I don't know if she really needs more or if she's just a big poulet ..." Then that's all I remember, except for the pretty lights. I think they probably gave me more because, when I had a bath the next day there was this electrocardiac sticky-thing on my back next to my ass and I don't remember anybody being that close to my ass. Despite repeated showers and baths the black mark from that sticky-thing remained. I finally had to scrub my skin raw to remove it. Since I'm having the other eyeball done tomorrow morning I didn't want the nurses to see the dirt from the sticky thing still there... they would think I'm a dirty pig.

The lights... I can't tell you enough about the lights. You do not see any of the eye-doc's tools coming toward you. For some reason, you don't see a bloody thing. Just these lights. Have you seen any of the Austin Powers movies? You know how each break in the action is marked by psychedelic backgrounds for Austin's bimbo dance moves? That's what it looks like and it's grooooovy, baby. 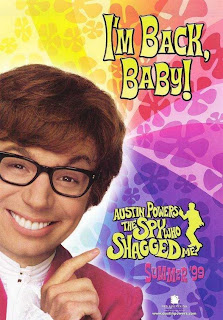 For a few hours after the surgery I couldn't see anything at all out of the new eyeball. Gradually my eyesight returned and I was stunned, absolutely stunned, by the clarity of my vision. The colours were off – the first couple of post-op days everything was red, like looking through cranberry glass. The next couple of days things were yellow. Two weeks later and the colours are normal but incredibly VIVID.
When you have cataracts you don't realize how badly you see things. It's like looking through a steamy window and all the colours of everything are pastel versions of themselves. When the old lens is gone the world is a bright and beautiful place.

The morning after my surgery I went outside and started bawling like a baby when the sheer breathtaking beauty of my part of the world hit me upside the head with a resounding slap. Mist was rising off the river, coating nearby trees with a sparkling patina of ice. Everything was so clear, so crystal-fecking-clear that I was dazed. I thought, how can anyone who can see this BEAUTY not want to live in this gorgeous, gorgeous world?

I wanted to tell you how my vision is. Well, here's the scoop: I used to be nearsighted in both eyes. Now I'm not nearsighted in the left. I can see things in the distance with stunning clarity. Only I can't see anything close up. Like my computer screen? Can't fecking see it with the new lens. Will need pop bottle bottom reading glasses to be able to see anything close up. In the meantime I am using Dave's old reading glasses, which are not my prescription but they're better than nothing, right? As for my right eye, for now it's still clouded with a cataract and it's nearsighted but is good with close-up. Dave's glasses make my right eye downright crazy. Like Steve  Buscemi as Crazy-Eyes in Adam Sandler's Mr. Deeds movie. 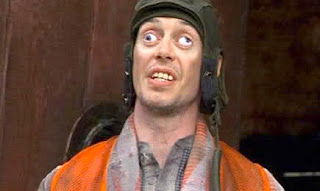 So, to summarize, I've got nearsighted and farsighted, cataract and non-cataract, all going on at the same time. It's all going to be fine, though. Tomorrow I get the other cataract removed and then in six weeks, when everything's healed up, I'll go to the optometrist and get fitted for new glasses. In the meantime, I'll get some reading glasses from the drug store to get me through the next month or so at work.

Oh, and I've figured out why I had the stupid cataracts so early in my life. I've been taking Solumedrol, a type of steroid, every two months for several years to combat my Crohn's disease. Apparently steroids speed cataract growth. That's the thing about drugs – they help you but they never come without risk. My son asked me today about medication for acne. I told him to wash his face more often before thinking about medication because you never know how it might affect you in the future. Besides, he's only got a few zits. Nothing a bit of soap can't handle.

Just a quick shout-out to some folks who have been having a rough go of it lately. To Mark and his family, and to Tammy and Richard and theirs, I send all my love, hugs and wishes. You are in my thoughts, my dearest, dearest friends.
Posted by Cathy Olliffe-Webster at 6:55 PM