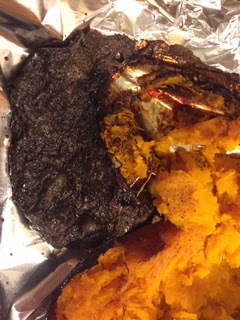 Happy Valentine's Day everybody! I'm really rocking it. It's 7:09 p.m. The romantic dinner I planned is, as that former president used to say, "A DISASTER," I'm still wearing the nightgown I woke up with, only now it's covered in food stains, and my feet hurt gawd-awful.

Basically another typical day in the Webster house.

I had told Dave, DO NOT BUY ME ANYTHING FOR VALENTINE'S DAY. Only this year I meant it. No, seriously. Hizzoner is off work recuperating from carpal tunnel surgery and we're broke. Well, we're always broke, but now we're broker than usual. Again, as the Orange One used to say, "WE'RE THE BEST BROKE, NO BROKE IS BROKER THAN US."

Of course Dave bought me a sweet card and enough chocolate to make a dentist orgasmic.

So as not to appear a total romantic failure, I offered to cook dinner. A nice dinner, you know? Especially since I haven't cooked since Dave had his surgery. Yes, he cooks with a bum hand. (I know, it's sad. Very, very sad. But you're jealous, amirite?)

I planned to make pulled pork, with creamy mashed potatoes, squash (he loves it, and that is NOT fake news), and a cake. Sounds good, right?

Well, the cake turned out alright. (It was a mix. Hard to screw THAT up.) But the roast, um, is still basically raw. Frozen in the middle. At - what time is it? 7:22 p.m. And don't forget about my unbathed body in the grease stained nightgown. Sexy as hell with raw pork.

I sawed the roast into pieces and shoved it in the Instant Pot for round two. The squash and potatoes are drying up like my sex life. I looked out the window a while back and thought, I bet there's a lot of rub and tug happening out there tonight. Probably lots of anti-maskers were out dining at local restaurants, enjoying the premier's decision to allow in-person dining again, spreading the love, spreading the COVID, going home and spreading other things with full bellies, a wine buzz, and really bad garlic breath.

We might eat sometime tonight. Not sure how romantic it will be - we'll probably wind up noshing on peanut butter toast and watching another episode of Wentworth on Netflix. Lots of smut on that show. Probably the only smut going on in this house tonight. Unless Dave gets excited over dirty old women, raw pork, and whine.

I smell the squash. I think it's burning.

Posted by Cathy Olliffe-Webster at 9:38 PM