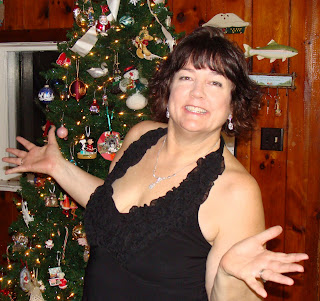 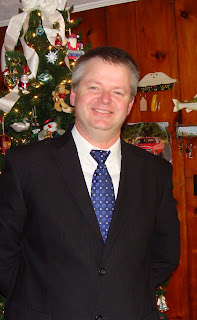 OK, dress #2. Low-cut ruffled neckline, flattering swish at the hips, as opposed to strapless and sequinned. Dave likes this one better because, as he says, "it really shows off the girls."

It's all about the girls, for Dave.

Which one do you like better? Gawd knows, I want to hear. Yesterday's comments blew me away. YOU GUYS ARE SO FUNNY. I was laughing out loud all day long, you know, when I wasn't dancing around to Nancy Sinatra's These Boots are Made for Walking.

Speaking of boots, I DID IT! I hugged the Boss! My sassy friend and colleague Sarah had promised me $5 in raffle tickets if I hugged the boss, something that just isn't regularly done at my office. I was kinda hoping she would have forgotten about the bet but even before dinner was served she was swaggling over saying, in her clever sing-song way, "I've got three raffle tickets with your name on them ..." So I had to, right then and there, go hug the boss. Even though I'd only had half a glass of wine and technically it wasn't nearly enough.

"OK," I said, getting up from my chair. "Let's do it." Sarah grabbed her camera and I marched over to the head table where the boss was talking to an even bigger boss (so many bosses, so little time ...). I waited until the bigger boss finished talking and then excused myself. "I made a bet with Ryeland over there, that I would hug you." I gestured to the giggling Sarah with her camera. "Three raffle tickets are on the line."

He smiled. "In that case," he said, "we'd better do it!" He stood up and gave me a sound and wonderful hug. I thanked him profusely and got carried away and planted a kiss on his cheek. He blushed and I blushed and the bigger boss laughed and Sarah took our photo. She handed over the tickets and, by rights, I should have won one of the big prizes. C'est la vie, however. I still won the bet and I had a nice hug and the boss smelled really lovely. So there! 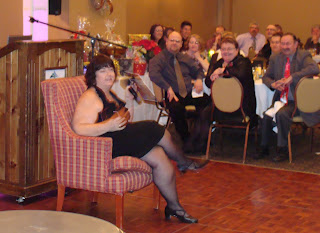 In other party news, I had been asked by super-party-organizer Laura to rewrite Twas the Night Before Christmas and read it to the party-goers. She printed out the poem in a book form (my first published work!) and dragged out a comfy chair for me to sit on. Her cohort Stephanie held the microphone and I told the story. Way too much fun! I think everyone enjoyed it as much as me. Here's the photo Dave took. Funny thing is, even 50 pounds lighter, this photo shows me I still have many pounds to lose. So what. I knew this weight loss thing was going to take at least a year and while I still have many miles to go, I am proud of how far I have come.


‘Twas the Night before Deadline

‘Twas the night before deadline, when all through the office
Not an ad rep was stirring, except for the bosses.
The ad copy was e-mailed to production with care,
In hopes that a gosh-darned Photoshop miracle soon would be there.
Production, as usual, was strung out and weepy,
Due to copy that was misspelled, messy and creepy.
Everything said in I-Chat came out in all-caps,
As they whined and they yawned and dreamt of some naps.
When out in the parking lot there arose such loud chatter,
Bill scrambled from his desk to see what on earth was the matter.
Away to the back door he strode in a hurry,
Sending inserts and flyers to the air in a flurry.
The moon on the crest of the snow-covered asphalt
Showed gum wrappers, coffee cups and an unopened bank vault.
When, what to Bill's wondering eyes should appear,
But a safecracking dude, and eight tiny masked reindeer.
With a balaclava, some dynamite and a flickable Bic,
Bill thought it highly unlikely that this guy was St Nick.
Slower than snapping turtles his coursers they came,
And he whistled, and shouted, and called them by name!
"Now, Andrew!  Now, Dougie! Now, Jackie and Tony!
On, Davey! On, Jenny! Stop eating baloney!
To the top of the safe! Try not to fall!
Now blow it up! Get 'er done! Let's see it all!"
As dynamite was lit and the Bic was let fly,
The door of the safe blew up into the sky.
Into the vault the masked bandits they flew,
With a sack full of ads and a story or two.
And then, in a twinkling, Bill heard on the roof
The stomping and pounding of each rubber boot.
He went back to his office and was turning around,
When down the back stairs St. Joe came with a bound.
He was dressed in Armani, from his head to his shoe,
And his suit was all tarnished with ink shaded blue.
A bundle of newspapers he had flung on his back,
And he looked like a reporter, a full-blooded hack.
His eyes - they were bloodshot! His fingers how weary!
His cheeks were all puffy, his nose kind of beery!
His sly little mouth was drawn up in a smile,
And his Movember moustache was as long as a mile.
He was in shape and buff, a right jolly young elf,
And Bill grinned when he saw him, in spite of himself!
A peek at the quarterly report and a nod of his head,
Soon gave Bill to know he had nothing to dread.
He spoke a few words to his faithful young lads
And they began filling the papers with bazillions of ads.
And laying his orders on the desktop for Bill,
He climbed out of the office and ran up the hill.

Bill danced back to his desk, on his lips was a whistle,
There were so many ads, like the seeds in a thistle.
He flung open his window and yelled with all his might,
"Happy Newspapering to All, and to All a Good-Night!"

Posted by Cathy Olliffe-Webster at 9:34 AM