It was a dark and stormy night...

Yesterday I was in the bathroom brushing my teeth and Dave walked by and said something to me, something inane like, "how's it going, eh?" and I shrieked. Scared him. Scared myself. Both of us crapped our drawers, and for what? Nothing. Other than I startle easy. I guess that's why I don't like balloons. I mean, they look so innocent, all colourful and happy, but then, BAM, they BURST in an EXPLOSION of BRRAAPPP, and I'm crapping my drawers again.

I don't mind those heavy duty helium-filled Happy Birthday balloons you get at the dollar store because they're made of military-grade tarp material and don't burst so much as just fizzle away. In fact I bought three of them for Dave's birthday back on December 1. Balloon 1 was killed off my by our son Sam on December 2 who sucked all the helium out of it and talked like Donald Duck for a hilarious couple of minutes. He wanted to do the same thing to Balloon 2 and Balloon 3 but I wouldn't let him, giving him a lecture on not ruining things right away and the evils of helium-inhalation.

A week later I sucked the helium out of Balloon 2. (Classic case of do what I say, not what I do.)

Balloon 3 has been floating around the house ever since, bobbing near the Christmas tree for a while, hanging in various bedrooms, blocking the TV and stuff. I think I dusted it on Christmas Eve. A month had gone by and it had pretty much become part of the scenery and we forgot about it.

Last night we were in bed and Dave said, "What the hell's that?"

His tone was that of someone about to be eaten in a horror flick.

"There!" He pointed to the end of the bed.

"AAAAACCCK!" I screamed, crapping my drawers.

"For feck's sake," Dave said, "it's that stupid balloon!"

Most of the helium had finally dissipated and instead of clinging to the ceiling, it was now hovering around the house at bed level.

Dave got out of bed and bravely wrestled the balloon to the ground, popping and tearing it and tossing it in the laundry basket where it wouldn't be able to hurt anybody, anymore. My hero. 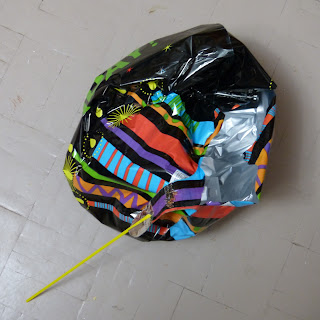 Posted by Cathy Olliffe-Webster at 8:02 AM