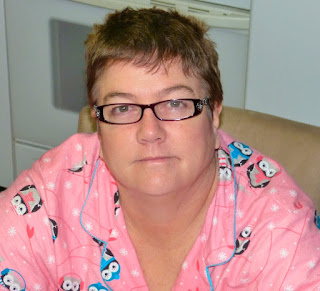 Oh feck, I cut all my hair off.

I've been trying to find a sprightly, cheery way to say that but, feck, it's gone, it's all gone. For the good, I suppose but still ... 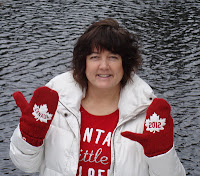 I was trying to come up with a not-worst photo to show you and inadvertently I came across a photo taken last winter. I was so cute a year ago. My hair was so bouncy! So dark and shiny and fluffy. I cry looking at it, thinking, "I was so adorable and now I'm HIDEOUS."

I look like a cross between a leather-wearing butch lesbian in a biker bar and a polyster-sheathed middle-aged matron in the Bingo Barn's doughnut department. I'm not joking.

Yesterday one of the salesmen at my work came up to my desk, leaned in really close and said, "WHAT did you DO to your HAIR?"

Other people have said, "Oh, you got your hair cut!" And I've said, "yeah," and they've walked away because their mamas always told them "if you can't say anything nice, clamp your big mouth shut and RUN."

But I had to cut it. I was at "that" point – that place in life where I just couldn't colour my hair one more time.

My hair is naturally dark brown; at least it was until a hairdresser discovered grey hairs on my head when I was only 18. By the time I was 35 I was colouring my hair all the time to keep the greys at bay. For a brief period in my early 40s I let the grey grow out but with my long hair I looked like a witch, so I coloured it again and have been colouring it ever since. 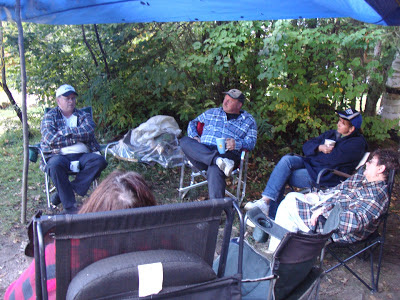 With my hair so dark and the grey so light, it seemed like I was getting skunk-head within days of getting the colour done. There was a photo of me and the gang on a fishing trip. I was looking at it and asked Dave who the person with the big bald spot on the back of her head was. "You," he said, "but it's not a bald spot, it's just your roots."

"GEEZ LOUISE," I said, mortified. "You mean I was walking around looking like that?" He nodded. "Dude, I love you, but you have to TELL me when I got a skunk sitting on my head!"

Another problem with dying your hair brown is the dark pigment accumulates in your hair until it's as black as the inside of a bowling ball and, I swear this is true, you look like an Italian grandmother. It's not a flattering look. Even on Italian grandmothers. That's why they cook so good, so nobody will talk about their godawful hair.

I decided to try dying it blonde a while back, thinking it would blend in with the grey hair better, but I still had more dark hair than grey, so a minute after the bleach job, I got dark roots. SO STUPID. I was getting dark roots with blonde hair and white roots with brown hair! It was driving me CRAZY!

Then I remembered Diary of a Square-Toothed Girl, a blogger buddy named Lisa, who was also prematurely grey, but a lot braver than me. At the tender age of 32 she went to a salon and asked them to chop it all off. 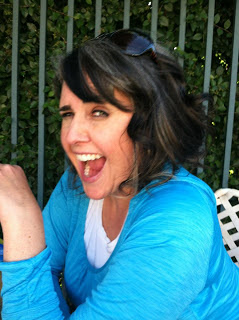 She wrote, "The hair I had been fighting against for so long was gone. I had never felt so liberated from my body. Usually, it was something I fought against. Frizzy hair begging to be flat-ironed, tiny crow's feet needing moisturizer, nails and toes that need polish--the list could go on and on...there is just a lot of upkeep. And one huge item on the list was gone."

I didn't want to deal with roots growing out so I did what Lisa did. I went to the hairdresser's and had them cut it all off, about a half an inch long all over my head.

Eventually Lisa's hair grew out and now she's got this sassy, beautiful hair, complete with grey streaks. That's what I want to have happen, too.

A year from now I'm hoping I won't look like a matronly biker dyke anymore. Just skunk-headless Cathy with a few grey streaks.

In the meantime, I'm hideous. Thought you should know.

Posted by Cathy Olliffe-Webster at 10:19 PM

Email ThisBlogThis!Share to TwitterShare to FacebookShare to Pinterest
Labels: Hair