Cat poo for Christmas and owie-owie-owie 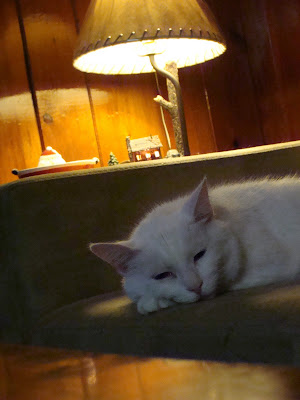 The cat is so damned annoying sometimes. He's under the Christmas tree, as we speak, stepping on stuff. Oh wait, now he's on the pile of paper in the burn pile, pawing it around. I hope he doesn't think it's kitty litter – he's not the brightest feline on the block. One thing I don't want to unwrap on Christmas morning is a dessicated cat turd.

Ask me what we did this weekend. Go ahead. Ask.

We bought a new TV Saturday morning. We had to, because the old one died. Well, it didn't die so much as whimpered a bit. Occasionally there were purple blotches on the right side of the screen. And then yellow splotches showed up sometimes on the right. Dave has been drooling over the new big screen TVs for some time and those splotches were enough to send him over the edge and straight into the arms of the local TV store. God help me if I ever get splotches on one side. Even a fat zit might be enough to see my arse plunked on the sidewalk.

But we couldn't just get a TV, oh no. We had to redo our entire living room. The old TV was one of those square tube jobbies and it was housed in a solid pine entertainment centre that Dave had built himself back in the early '90s. My husband is a talented woodworker and this puppy was phenomenal – it also had big hair – but it was designed for the old tube TVs so it wasn't any good for our new one. So it was off to IKEA for a new TV stand. Only we couldn't just get a stand – we had to get a matching wall shelf and a book shelf because IKEA is like crack and we had two gift cards from our wedding (thank you Mark and Dave O) and My Name is Cathy and I'm an IKEA-holic.

IKEA is a long way away from life here in the Muskoka boonies so the shopping trip took most of the day. Especially when it was combined with a trip to the Mandarin buffet (oh gawd, it's Weight Watchers tonight – I'm screwed). We got home early Saturday night and Dave set right to work putting the IKEA stuff together. Dave is all too familiar with the IKEA alan-key but obviously I wasn't thinking straight when I said, "You're an old pro at this now. You should be able to put this stuff together in your sleep."

I was in the other room when I heard hims swearing. The first time. Two of the three items were almost completely assembled when he realized he had a couple pieces on backwards and thus had to tear them all apart and start over. The first time he had a sense of humour about it. The second time, not so much.

Yesterday we finished the assembling and started renovating. Because essentially this is what we did. Everything had to be moved out of the living room. All the CDs, DVDs, decks of cards, old photos, books, candles and crap had to be emptied out of the old entertainment centre. Then we had to carry the thing (did I mention it's solid pine?) up to the bunkie. The bunkie, in case you didn't know, and how could you unless you've been here, is a separate apartment on the second floor above our garage. In the summer we use it as a guest house and in the winter it's simply a big crap warehouse.

Oh. That thing was heavy. And oh, my back. My shoulders. My legs. My arms. Even my butt hurts. How did that happen? Dave obviously doesn't realize I was built for eating bon-bons on the couch, not heaving couches up narrow steep flights of stairs. Did I mention we also moved a couch? Needlessly? Once we got all the IKEA stuff set up we had room for another seat of some kind. I suggested the love seat we have in the bunkie. So, after pushing that heavy mother of an entertainment centre up the stairs, we brought down the almost-as-heavy love seat down the stairs. Only to find out it was way too big for our space. (Can anyone say "measure first?") Before we could fully grasp how stupid we were, we moved it back up those stairs. Cathy's Furniture Moving Service: Moving  Crap Needlessly Around Since 2011.

Posted by Cathy Olliffe-Webster at 7:51 AM