Come Looking For Me

Nope, not going anywhere. Nowhere exciting anyway. OK, so maybe I'm going to the grocery store, because I'm out of stuff – if I don't show up in a couple of hours, come looking for me in the margarine aisle. I'll be glommed on to the Becel because far be it from me to buy the cheap toast salve. Same with ketchup and toilet paper – if it doesn't cost big bucks, I don't want it.

If you're looking for something actually exciting, you'll want to check out Come Looking For Me, a novel by one of my Muskoka Novel Marathon writing buddies, Cheryl Cooper. 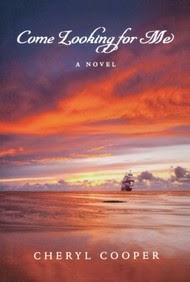 One of the resolutions I actually made this year is to support up and coming authors. After publishing two books last year, I am very familiar with the work it takes to not only finish writing a book but to get it published ... and then, after doing all THAT, trying to get people to buy it and then review it! One of the things I learned is how important it is to post a review on Goodreads and Amazon, or wherever you buy a book. Big name authors like Stephen King have marketing departments to publicize a new book. Authors like me depend on word of mouth and reviews to spread the word. So I've made it a point to review and write about every book I enjoy. You won't find me writing about King or John Grisham (well, unless it's King's On Writing, which I recommend to every writer on the planet). I love their books but they don't need help from me.

Not that Cheryl really needs my help. If you were to meet dear Cheryl, you would love her. She is one of the nicest, most generous, most positive people I have ever met. She is a shining star at the Muskoka Novel Marathon. Absolutely everyone adores her and she spreads her bright light on everyone she meets.

Mizz Cheryl is also a talented writer (she's good looking too - nice, talented AND good looking ... *sob* It's just not fair) who has also written a sequel to Come Looking For Me, called Second Summer of War. Apparently this one hasn't been released yet but I'll be checking it out when it is.

Come Looking For Me is historical fiction at its finest, featuring a mysterious and energetic young woman named Emily who tries to cross the Atlantic Ocean during the War of 1812. Her goal is to get to Canada but she never arrives. The entire story takes place at sea, on the massive ships of the day. Describing those ships, and the fabulously whimsical characters who call them home, is where author Cheryl shines. She did her homework and then some. Now, I'm no expert by any means, but her details ring true. And it was extra interesting to me that the story was set during the War of 1812, the great war between the U.S., England and Canada. I love my American neighbours, I really do, but I take great pride that future Canadians kicked America's butt when they tried to take us over. It's a David and Goliath thing, I guess.

There's also some swoon-worthy romance, plenty of battle scenes and drama, drama, drama! Cheryl divvies the drama out in giant spoonfuls and I lapped it up.

Love historical fiction? You'll love this. If you do decide to read Come Looking For Me, make sure you review it. Tell the world! Spread the word! Support struggling authors everywhere!

Posted by Cathy Olliffe-Webster at 12:39 PM

Email ThisBlogThis!Share to TwitterShare to FacebookShare to Pinterest
Labels: Cheryl Cooper, Come Looking For Me