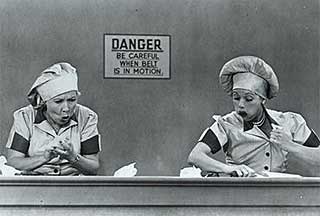 So. Imagine me as I Love Lucy and you'll get general gist of what I'm about to tell you.

It was a dark and stormy night... hell no, it was a dark and stormy day at the office. Busier than a one-armed paper hanger. Busier than a two-peckered rooster in a henhouse. Suddenly, the work stopped. I had a 10 minute hiatus while other people got their shit together. Being the conscientious employee that I am, I decided to take my lunch dishes to the kitchen. There, before my helpful eyes, was a loaded dishwasher waiting to be run. I added my dishes to the dirty fray and then looked under the sink for some dishwasher soap. There was a teeny, tiny, itty, bitty couple of granules in the bottom of the box.

Feck, I said to myself. It's just like home when someone leaves a mouthful in the bottom of the milk pitcher.

Oh well, sez I, as I dumped the remaining bits in the soap dispenser. Realizing there wasn't enough soap in there to clean a missionary's mouth, I decided to add a bit of Palmolive dish soap to the mix. You know, the stuff you normally put in a sink. There still didn't seem to be enough so I squirted it generously around the bottom rack, and then gave the top rack a squirt for good measure. I closed the dishwasher door and started it up and, as I walked back to my desk, a swing in my step and a halo over my head, I thought, what a good employee am I.

Still with nothing to do momentarily, I struck up a computer chat conversation with my pal Sarah, who works in a different office than me, and she was telling me about an appointment she had when I got an e-mail from the office manager. It didn't have a subject line but it was addressed to everybody in the building. It was a one-sentence message.

It said: "WHO RAN THE DISHWASHER THIS AFTERNOON?"

The unmistakeable smell of dish soap wafted all the way from the kitchen to the back of the building where I sat, red-faced and panicked.

I interrupted whatever the hell it was Sarah was saying and started typing.

C: I just got an e-mail and it said, 'WHO RAN THE DISHWASHER THIS AFTERNOON?' From the office manager! And it was me! I put Palmolive dish soap in it and now I think it's exploded with soap suds!

C: I can smell the soap! I think there's a big mess in there. What should I DO?

S: My friend did that once and there were bubbles all over the place, I mean it exploded with bubbles. Don't tell them it was you!

C: People are talking about it. Someone just walked by and was complaining about the soap mess in the sink. "All we can figure is some dumbass put Palmolive in the dishwasher and let it run."

C: I know! ROFL! If someone asks me why I'm laughing, I'm dead meat.

C: OMG, I won't. I'll be in such shit. I was just trying to help. And I put extra Palmolive in so it would do a better job.

C: This reminds me of the time when I joined a gym and there was a jacuzzi and there was a sign that said NO BUBBLE BATH ALLOWED. So I just put a little tiny amount of bubble bath in there. And there was freaking bubbles EVERYWHERE. They were TAKING OVER. I ran out of there so fast!

C: There was no sign saying don't put Palmolive in the dishwasher. Who knew? I didn't know. OMG, everybody's talking about the smell. There's bubbles floating around in the production room. I'm gonna pee myself, I swear I'm gonna pee my pants.

And so it went.  I was laughing just like this:

Oh feck, I hope the boss doesn't read my blog...
Posted by Cathy Olliffe-Webster at 8:39 AM