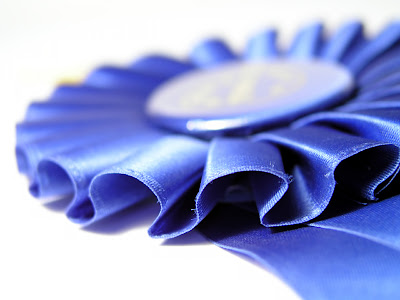 There's a new blue ribbon in my Weight Watchers kit, the kind of ribbon a prize pig gets at a county fair. "I LOST 10 POUNDS," it proclaims in bold gold lettering. The 10 is inside a gold star.

Stupid ribbon. What am I going to do with a ribbon? Am I going to pin it on my shirt and wear it to work today? (Does the fat lady really want to draw more attention to herself by increasing the resemblance to Babe?) I will probably wind up taping it to the fridge door. Then, every time I think about eating something I shouldn't, I'll see that ribbon and think twice. Still, it's just a dumb ribbon. So why did I care so much when I almost didn't get it?

Last night I went to my Weight Watchers meeting, my third one, and I was a little disappointed when I only lost one and a half pounds. Yes, it's still a loss but, compared to the nine and a half pounds from last week it seemed a minor accomplishment. "Oh, only one and a half pounds?" I said to the lady weighing me. She made a face at me when she was filling in my information. "You've lost 11 pounds in three weeks," she snapped. "That sounds like a pretty amazing weight loss to me."

There are all kinds of rewards at WW; things like star stickers and ribbons and key chains. I can't even tell you what they are because I'm new and I haven't figured it all out yet. At the end of each meeting the leader goes through the reports from everybody's weigh-ins and announces milestones like who has reached their goal; who has lost 5% of their body weight; and who has lost 10 pounds. I thought, I've lost 10 pounds, and waited for the leader to call my name.

She never did call my name. She called many other women's names, but mine wasn't among them.

I felt ignored. Unimportant. And kind of mad, too. I asked the woman behind me, "Did you get that for losing 10 pounds in one week?" She shook her head. "No, it's just for 10 pounds, period." So I stuck up my hand and when the leader called on me I said, with some embarrassment, "So you get a ribbon when you lose 10 pounds?" She said yes. Then I said, "I lost 10 pounds. Actually I lost 11 pounds." And she made a big fuss and came over and gave me a ribbon and I felt my face go red, but in a good way. The leader then proceeded to say that when we reach a milestone we have to let the ladies at weigh-in know so they can write our names down on the sheet and claim our rewards. "You have to ask," the leader said. "You've earned it. You deserve it. Make sure you ask."

Funny how life is. Yesterday I had a similar thing happen at work. Our company is launching a brand new newspaper and I was asked to design it. The whole newspaper. Exciting, right? I know! I have designed an entire newspaper once before and it was the most fun I ever had in my job. And quite an honour. To me it is a sign of respect that I was asked to perform such an important function. I'm also aware that I'm saving the company big money. Once upon a time, a long time ago in a land far away, I worked in the big city for a national medical magazine. When it was time to have the publication redesigned, the company paid half a million dollars for a big-name designer and his crew do the work. That man has designed some of the most prestigious publications in the world. Now, I don't even pretend to produce the kind of work he does and my stuff isn't even close to being worthy of that kind of dough. Still, I produced a good-looking style for the newspaper, a style that was accepted by my superiors with nothing but praise, for only the cost of my regular wage. In other words, cheap!

Today our first issue goes to press so yesterday was all about getting down to the nitty gritty. Part of what I did yesterday was design a two-page spread outlining the 'who we are' part of the paper. The  editor had given me a rudimentary map: he wanted pictures of the big wigs here and pictures of the not so big wigs there, and he divided the paper into three departments: sales, editorial and distribution. There was no composing department. No recognition of my work as the designer and as the ongoing person who puts pages together; no recognition of any of the production team, except for our manager. I felt slighted, to say the least.

Composing is usually the least prestigious part of most newspapers. Composing and distribution. We're the magic elves who make the thing look pretty, who make sure it gets to the press and the ones who deliver it to your mailbox. We don't sell advertising and bring the money in. We don't have the celebrity caché of the reporters, who rub elbows with the big wigs in town. We just hunker down and do our jobs and basically get ignored by everyone else. If we screw up we sure hear about it; but there is no morale-boosting bonuses or recognition. We just toil away in the salt mines and dream about pats on the back.

Last week was kind of bizzare, though. Last week we had a union vote at work. The lines of warfare were evenly distributed between advertising, which is generally company-oriented, and editorial, which is generally union-oriented. The wild card in the mix was production. Nobody knew how we were going to vote. Suddenly we were the most popular kids on the block. People in editorial who barely said good morning to us were suddenly greeting us with smiles at the back door. The company head honcho was sending us e-mails saying "Dear Colleagues" beseeching us to consider not voting for the union. We felt uncomfortable but very popular. I actually took the opportunity to send an e-mail to the head honcho, pointing out that we were generally ignored by the company and perhaps the occasional pat on the back or including us more often as part of the team would be a good idea. I got a great response to the e-mail. I thought my message got through.

And then yesterday. No acknowledgement whatsoever of the part composing plays in the new newspaper. I wondered how to react. Should I just ignore the situation? Should I demand that pat on the back, that blue "I lost 10 pounds" ribbon?

Hell yes. I earned it. I deserve it. I am just as important as anybody else. Every time I allow myself to be treated like a doormat reinforces the idea that it's okay to treat me as a doormat. It's hard to ask for recognition. One most levels I believe good work should stand on its own merits; that my own satisfaction is enough – who cares what someone else thinks? But deep in my heart of hearts I am still that child who seeks approval from her parents, from her teacher, from everyone.

It's just a stupid ribbon.

But it's mine.
Posted by Cathy Olliffe-Webster at 8:17 AM