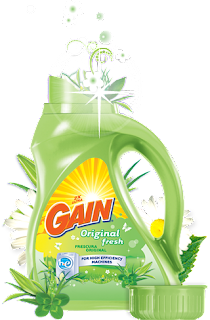 I've been out of laundry detergent for a WEEK. As anyone who wears clothes knows, that's enough of a backlog of dirty socks and underwear to set-dress for Hoarders. I was just too darned busy to get to the store and buy soap, you know? So last night the whole family went to Wal-mart – I know, big-time excitement. Part Ringling Brothers, part You Tube, a trip to Scrawl-mart is about as close to Disneyland as it gets in this house.

That bargain-seeking fever hit us as soon as we walked through the front doors and into the loving arms of the blue vested, blue haired, arthritis-adled Wal-nuts greeter. I snatched the flyer from her trembling fingers and almost knocked her down in my rush to the Hoover Dam sized display of Gain laundry goop sitting right across from the $6 pre-roasted chickens. (Question: how come the pre-cooked chickens cost less than the raw ones in the meat department? Anyone?)

Gleefully I plucked bottle after bottle of liquid Gain from the display and tossed it cavalierly into my cart.

"Better get SOME MORE," said Dave, his toothpaste-white teeth glinting like a tart salesman's eyes at a bingo hall.

And so we put lots and lots of Gain in our cart. We were gaining, one might say, a plethora of fresh-scented bargoons and we were delirious with consumeristic joy.

Today I heard bad words coming from the room we euphemistically call the laundry department.

"Oh dear," I thought. Musically. "What can the matter be?" After I pondered why Johnny was so late at the fair and who Johnny was anyway, I rushed to the Maytag to see.

Dave was standing in front of the washing machine holding one of the many containers of Gain.

"It's fecking FABRIC SOFTENER," he said. I looked at him like he had two heads so he said it again. Only this time he pointed to the bottle of Gain, like he was a professor, the Gain was a blackboard and I was the kid wearing the dunce cap in the front row. "It's. Fabric. SOFTENER."

Our clothes will be filthy this week but they'll be softer than a baby's bottom.

Come to think of it, they'll be as smelly as a baby's bottom, too. Le sigh.


Posted by Cathy Olliffe-Webster at 10:25 PM