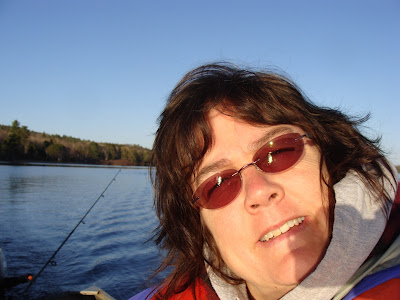 My lord. Could I be any more tired? My ass is dragging so low I need to buy me some of those pants on the ground, just to prevent dirt build-up in the crevices. I'm so tired my vitamin needs a vitamin.

First off, my apologies for not being around to your blog to say hi. I've been away for the last five days in a place where there is no internet, no cell phone service, no phone, no pool, one pet and no cigarettes. It was our annual spring trip into Kiosk, the northernmost camp area of Algonquin Park, a former logging town, now a ghost town that is rapidly disappearing in amongst the trees and everything Mother Nature can throw at it. We think we're going to leave our mark here on this earth forever but the minute we turn our backs, the earth reclaims what was hers.

We don't go to Kiosk to philosophize, although this place brings the philosopher out in me. Something about the wild beauty, the scream of gulls, the harsh, throaty rattle of ravens, the eerie call of loons, the thumping machine-starting rhythm of the wings of ruffed grouse – all these sounds, carried on cold northern winds, settle into the oldest part of my old soul.

No, ostensibly we go to fish – although we were almost skunked in that department. Dave caught one fish. His brother, Tom, caught another. My sister, Liz, caught enough clams to host a clambake, I caught a piece of driftwood big enough to be called a log and my sister-in-law, Susan, caught a nap. My brother-in-law Don caught a hole in his boat and managed to fix it with some silicone before the good ship made like a smaller, rattier version of Titanic and sunk to the bottom of Lake Kioshkokwi like an ignoble stone.

Doesn't matter whether fish were caught. Our thirsty lungs filled up with fresh air like sails on a great ship. We ate too much and we laughed too hard and we slept like the dead.

Right now I'm recuperating from the long drive home, the hours of unpacking and piles of laundry, and I'm absolutely warm for the first time in days. Man, it was cold up there – cold being the understatement of the year.

I'll tell you more about it later. Right now I've gotta have a bath and get ready for work. Gak. How can five days come and go so damned fast?


Posted by Cathy Olliffe-Webster at 8:13 AM

Email ThisBlogThis!Share to TwitterShare to FacebookShare to Pinterest
Labels: Kiosk