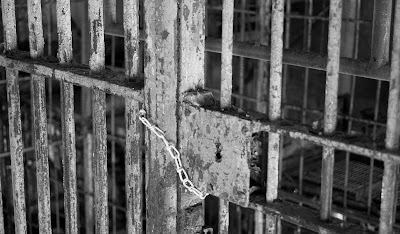 I lost custody of my kids, I can't travel outside of Canada and now I find out I can't get life insurance. How many ways do I have to pay for smacking my ex with a Dr. Seuss book and biting a cop's thumb?

The insurance guy called me at work yesterday morning to say I was declined. Not that I was surprised. They had approved my husband a couple of months ago and had been taking his money (actually twice the money they were entitled to – a so-called mistake) out of his bank account for a while. The agent said he was still waiting to hear how my application fared. See, I knew they wouldn't sell me life insurance but I figured it would be because I have Crohn's disease. He said no, it wasn't the Crohn's – although, had they approved my application, I would have been paying premium rates.

He hemmed and hawed, trying to find a way to say even though I lost 50 pounds I was still too fat for his liking. "But no," he said, "you were declined outright because of your criminal record."

Seven years ago my husband of 19 years cheated on me. We had a huge fight. I swatted him with a children's book then called the cops to have him removed from the house. He told the cops I hit him and I was charged with assault. I freaked out. One of the cops held his hand over my mouth to shut me up and I bit his thumb.

That's what happened. One night that changed my life forever. It's the basis of the novel I'm writing, a lesson to women everywhere on what not to do when your marriage falls apart. Some day I might even finish it.

Something else that's not finished is the way I continue to pay for that night. Just as I manage to put it behind me something new happens. Yesterday was hard. Not only was the insurance guy telling me I was fat, he was also calling me a criminal. All I could hear were the negative voices in my head screaming, "YOU'RE A FAT, UGLY CROOK, A WASTE OF SKIN AND DON'T YOU EVER FORGET IT." I tried not to cry at work but I failed miserably. It was all I could do to stay at my desk – every fibre of my being wanted to flee, wanted to go home and dive under the bedcovers and cry away the afternoon.

You know what? I didn't even want the stupid insurance. The agent had talked my husband into it. He said it would save us money because we have separate life insurance policies on our house and our car, as well as Dave's own life insurance. He tried to sell us on one comprehensive policy on everything. I was doubtful (I don't trust these guys as far as I can throw them), but I was willing to go along with it, for Dave's sake.

So first the agent came to our house. Spent two hours sitting at our kitchen table, asking us a zillion personal questions about our health and our finances, getting us to fill out forms and drinking our coffee.

Then a nurse came on a Sunday afternoon. She asked more health questions. She weighed us. She took our blood. Made us pee in a cup.

A while later a some other woman phoned us. Spent a half an hour with each of us, asking us the most personal questions you could ever imagine. One of the questions she asked was, "Do you have a criminal record?" When I answered yes, she wanted all the details. The charges, the sentence, the dates – everything but my side of the story. She didn't want to hear how a marriage break-up can destroy your sanity; no, it was just the facts, ma'am. I was shocked. Couldn't see why on earth she wanted to know, or why it mattered. Does it mean that I am more likely to go into a rampage and shoot up a children's library? Or that I'm gonna get shot by cops the next time I have a hunger for thumb?

I told the agent that I was humiliated by the entire process. He said, "That's standard procedure across the industry." Like that makes it OK to dig into a person's life, to poke and prod at the things that hurt someone the most. If my worst enemy was to decide to hurt me, he would call me fat and then bring up my criminal record – and then he would pronounce me not good enough.

That's the thing that hurts the most. Not being good enough.

Well, fuck you life insurance company. Fuck YOU. I am good enough. I'm better than you'll ever be and I am THROUGH with this bullshit of people telling me I'm not good enough. Take your life insurance policy and stick it up your ass.
Posted by Cathy Olliffe-Webster at 7:37 AM