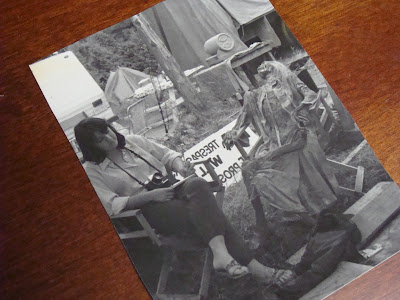 I just had a deep thought.

I was rushing past the bathroom mirror to shut the running water off in the tub and I caught a glimpse of myself going by. And I thought, "gee, I'm old." And also, "this is how I look now. But that's OK. I am good with looking my age."

But that's not my deep thought.

This whole getting old thing is taking a lot of getting used to and I think I just now figured out why.
Bear with me a second as I sort through it.

When we're kids, and up to the age when we stop growing, our looks change drastically every five minutes, or so it seems. Kids get used to seeing something different every time they look in the mirror.

In the years between 20 and 50, things pretty much stay the same. We might get fatter, or our hair gets thinner. Or grayer. But basically everything stays constant. At least that's how it's been with me. For 30 years, every look in the mirror showed the face I have been intimately familiar with.

Once I hit 50, things really began to change. The wrinkles in my face are coming out of nowhere. The texture of my skin is thinner. The gray is coming faster. The face I have known for so long is changing as quickly as it did when I was a kid, only it's the reverse. Instead of growing, my face will be growing old, at the same rate as it grew up back in my youth.

That's why I get so freaked out when I look in the mirror. Every time I see myself, I look different. And if I'm lucky enough to live another 20 years, I will watch the changes come faster and faster.

Our lives are like the life cycle of a tree, I guess. We start as seeds, we grow, we stay the same big strong tree for decades or centuries, and then we start to rot at the same speed at which we first grew.

It's the speed of the rot that freaks me out.

The photo, above, was taken in 1981 at a set for a movie being filmed in this area - a tacky horror flick called Humongous. I was working for the Gravenhurst News at the time. It was my first job and I was only 20 years old. It was the beginning of my face as I knew it for 30 years. I have to say, there were many times when I cursed my face for not being pretty enough, but now that I see my new-old face in the mirror, I can appreciate it for how beautiful it really was. (I'm hoping to write a magazine article about that old movie - it's why I dug through my yellowed, dusty archives of newspaper clippings and probably what got me pontificating on the wonders of aging.)
Posted by Cathy Olliffe-Webster at 8:22 AM