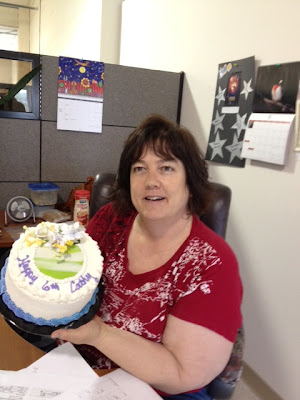 Let there be cake!

Ah, were more blessed words ever spoken? There should be cake on every holiday. It was International Women's Day not too long ago and I asked, because I always ask, "Is there cake for that?" And my friend said, "no," but there should be. I mean, Margaret Atwood's book The Edible Woman was all about a woman gaining independence and her sense of self-worth by baking a cake in the shape of herself and eating it. So if there's any holiday that needs a cake, it's that one.

Oh, also? According to The Watery Tart Hart Johnson, yesterday was International Outdoor Intercourse Day. Can you imagine a cake for that? If you're partnerless, it could be a single layer. If you're with your sweetie, it could be a two layer, one chocolate, one vanilla – up to you which one goes on top. And if you have more than one partner, you could have a multi-layered, multi-flavoured cake.... now we're talking!

Yesterday my sweet, wonderful and very weird colleagues surprised me with CAKE because it was my sixth anniversary working for the company. They were SO NICE (love them, love them like butter) and the cake was SO DELICIOUS. It was one of the new cakes from the bakery at Gagnon's Independent in Bracebridge (how I love that store) and it was absolutely fab. The whole thing got demolished in a matter of minutes.

So thank you, lovely lovely people. Big buttercream-covered hugs and sugary kisses to you all!

The photo, which was taken by my colleague, Gail (thanks!), shows a multitude of things: my humongous arms that are bigger than my head (I have the fattest arms in the world. It's true. They're in the Guinness Book of Fat Arm World Records); my calendar from charming, talented Nova Scotia artist and blogger Shelagh Duffett; the Coffee Mate creamer that I don't use anymore because it's fattening (unlike the cake, which doesn't count); my disgusting, empty salad bowl from lunch; Fibre One cereal for bowel-happy snacking; my fan for occasional hot flashes; and my Star Wars award poster for being uber Star Warsy (it was a company awards thingey. I won for creativity – I'm making fun of it but secretly I'm still proud of the whole thing); and finally, the falling-apart arm of my leather chair that my sweetie bought for me when I first started working there... six years ago... wow. Hard to believe.
Posted by Cathy Olliffe-Webster at 8:20 AM