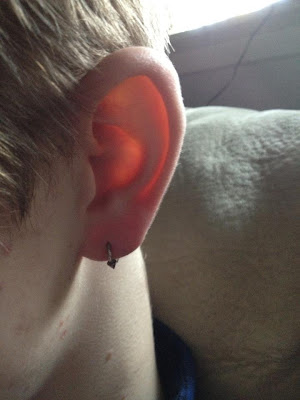 "Sure," I said, because I grew up at a time when all the coolest guys had one ear pierced. "BUT THAT'S IT. No nose piercing, or tongue piercing, or belly-button piercing, or woo-woo piercing. No piercings on your damn eyebrow or your cheek – neither the cheek of your cheek or the cheek of your arse. None of those big hole stretchy piercings that make your ear lobe into a picture window, either. Those really gross me out. Can you imagine being an old man with picture window ear lobes? All that long white ear hair and orange wax chunks stuck in the ginormous hole, that grows bigger and bigger as you get older (because it happens) until you're 90 years old and your floppy, holy ear lobe stretches down to your flappy, pierced, hairy nipples. And when you're at the nursing home the personal care workers will have to dig out yesterday's oatmeal from the hole in your tongue, only they won't because, ewww, that's just gross, so the food will moulder there until it stinks and none of your grandchildren will visit because you smell like the science experiment in my fridge at work."

Angus stared at me uncomprehendingly. "So does that mean I can get it done?"

Oh for heaven's sake. A perfectly good lecture in one holy ear and out the other. "I said yes. Where are you getting it done? The hair salon in town?"

Jaylene is Angus's girlfriend. She's got more piercings than a baked potato. Apparently she has given lots of people piercings and is a bit of an expert in this department.

"Oh really?" I snorted, visions of bloody ears, screams and infections dancing through my head. "What's she going to use, a darning needle and an ice cube?"

Angus assured me she was using "the proper equipment" with disposable needles that only get used once.

***
When I picked him up from the GF, he came bobbing out to the car baring his neck. I had forgotten about his earring and thought he was giving me an opportunity for hickey inspections.

I thought, "you have a hickey on your ear?" But then I saw the nifty-cool earring and was suitably impressed. "Good job," I yelled out the car window to Jaylene. "Did he cry like a little girl?"

"YES," she said, laughing. My big, brave son laid his head on an ice pack for a half an hour before the big ta-doo and apparently clung to his GF like a castaway on a lichen-covered rock, screaming, when the deed was being done. I heard all the gory details and, suffice it to say, new equipment or not, it was still very much like a darning needle and an ice cube.
Posted by Cathy Olliffe-Webster at 7:02 AM