The Face in the Tree 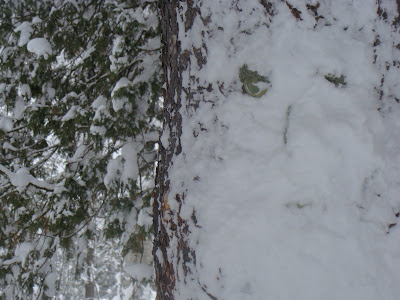 This is the face that lives in the tree.
A benevolent fellow, agreeable, good-humoured and a trifle stout. He's always got a smile on his face; except not right now because Dave pointed the snowblower his way and he's a lot like Highway 11: snow-covered and slippery.
"I didn't mean to get the face," Dave says.
He likes the face. "It's like the tree's looking at ya."
Sam doesn't like the face, for exactly the same reason.
He walks by it gingerly, keeping an eye on it as he goes by. The tree watches him pass. Like the Mona Lisa. A demonic Mona Lisa.
Sam is afraid of many things. Our house. The bathroom when  no one else is in the house. Scary movies. Soap.
His brother Angus is afraid of nothing. Or so he says. I've noticed he is afraid of being in the bunkie alone, being in the house alone, going down to the basement alone and waiting in the car alone. Other than that, he's not afraid of anything.
Both boys want to play mature-rated video games. Angus wants a zombie game for Christmas. "It's not scary," he insists. "
A couple weeks ago we watched A Haunting in Connecticut. It had zombies in it. Just like the video game they want. Sam couldn't tell you much about it – he viewed it through the back of a pillow.
Angus was ticked about Sam's scaredy-cat behaviour.
"Sam! It's not that scary! You're being a weeney!"
This from the boy who has slept with a nightlight on since he was three.
Whatever.
I like the tree.
I think the tree likes me.
And as long as I'm nice to it, it won't kill me in my sleep.
P.S. Here's a few snow photos from today. 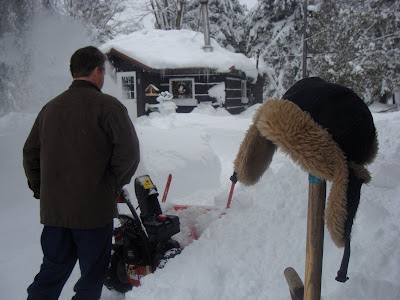 Dave posted his hat on a shovel because the balmy temperatures combined with his hard work made him a little on the sweaty side. He was outside for most of the day shovelling and blowing snow. Fun? Wow. 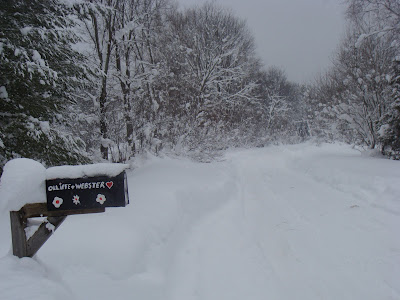 Our road. At least I think it's our road. Kinda hard to tell all buried in snow like that. 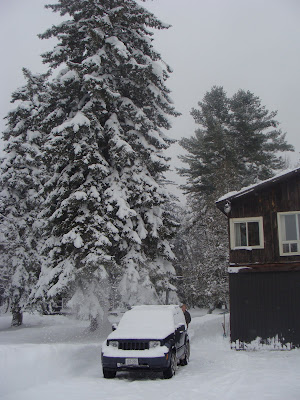 The trees in front of our house are so big I can't take a photo of them in their entirety. They're probably at least 100 years old.
Posted by Cathy Olliffe-Webster at 3:07 PM