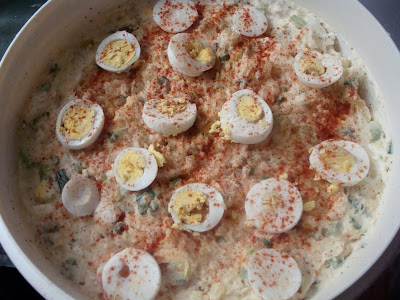 Mom makes the best potato salad in the world.
I'm not just saying that, it's true.
If you don't believe me, ask my cousin who proclaimed it so at last summer's family reunion.
"Aunt Dot, you make the BEST potato salad in the world!"
See, what'd I tell you?
But the old potato salad ain't what she used to be. Not since they stopped making Bojac Salad Dressing. Do you remember this stuff? It was a glutinous mass the consistency of tough jello, but it tasted SO good. My mom put it in devilled eggs, chicken salad, tuna, salmon, lettuce sandwiches (my favourite: Wonderbread, Bojac, one Kraft single, loads of iceberg lettuce cut thin and crunchy, more Bojac, yummmmm), and, of course, potato salad.
Not everyone knew about Bojac (which I guess is why it went out of business) but everyone, and I mean everyone, who tasted Mom's potato salad proclaimed it was (here we go again) the BEST in the world!
When Bojac went out of business (this happened like 25 years ago), Mom's reputation suffered. Her salad was no longer unique. She experimented with other mayonnaise but nothing had the same zip as Bojac. She sank into a deep depression, started using heroin, sold my brother for a cheap fix and started whoring on Jarvis Street. After years of skank and leather, she finally settled down and resigned herself to Miracle Whip.
It's ok.
You know, barely.
Better than Hellman's, that's for sure, or the no-name crap.
Mom does her best with it, though. Gotta give her credit. And, I'm proud to say, she has kicked the Bojac habit. Now, when you ask her about it, she has blanked out the Bojac years. Post-traumatic stress, I say.
"Bojac?" she says, distantly. "It wasn't that great. I like Miracle Whip just as well."
Sad, isn't it?
For years,  I tried to emulate Mom's potato salad and I think I got fairly good at it. Here's the lowdown:
Mash the potatoes when they're hot and mash 'em until they're smooth.
Add tons of Miracle Whip.
Add lots of chopped green onion and radish. Cut some eggs on top for decoration. Sprinkle with mandatory cupboard-brown paprika. Refrigerate until it's cold.
The smoothness of the Mom's salad is what makes it so great. There are two types of potato salad lovers: the smooth and the chunky. It's like peanut butter, isn't it?
I've always been a smoothy.
Until last winter when I went to a dance at the Sundridge Legion to hear world class songbird Tina Turley (who I just happen to work with and adore but don't stalk at all because that would be totally uncool) sing her little heart out. She was great, yada, yada, yada, but she was no match for the potato salad they served for the midnight lunch.
Oh, mother of god, it was so choice!
Chunky! Flavourful! Full of chopped egg! And chopped celery! And celery seed!
I swooned!
Dave, who wasn't hungry at the time, said, "How can you even eat?" And I tried to tell him how GOOD it was, that it was the BEST IN THE WORLD, honest to god, but he had a stinky look on his face so I just had a ladylike blob on my plate and treated him resentfully for the next week and a half.
I could have eaten the entire bowl!!!
Ever since then, I have tried to copy the Legion potato salad recipe.
To no avail.
I began to get a reputation as being the worst potato salad maker in the world.
I persevered.
Finally, a month or so ago, I think I came close. Here's the recipe:
Use yellow-fleshed potatoes.
Mash ROUGHLY when they're still hot.
Use LOTS of hard boiled eggs, cut chunky.
Chop lots of celery and green onion into medium size bits.
Use LOTS of Miracle Whip, celery seed, Mott's caesar rimmer spice, seasoned salt and freshly ground pepper. Chill and then pig out!
I made some tonight for a pot luck we're having at work tomorrow.
I know, it looks like vomit on a stick, but it's really kind of delish.
P.S. I really love my mom. Not only is she the nicest, most ladylike, honest, caring (she used to hold my hair off my forehead when I threw up) person I know, she also makes really, really good Christmas pudding.
And she looks great in leather.
Posted by Cathy Olliffe-Webster at 8:46 PM