Tippy, The Best Dog Ever 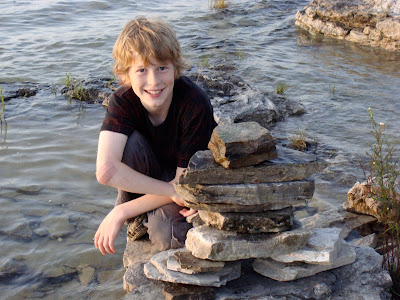 Someone should tell Angus that there isn't any money in being a writer.
Oh, there might be money in it if you're Stephen King, but not if you're me. Not a lot, anyway. My first newspaper job paid $75 a week and I had to have a place to live and a car (that worked). By the time I paid my car loan and the rent I barely had any left over for drinks at the hotel. Truth be told, sometimes I spent all $75 at the bar. (Having a roof over your head when you're 21 is overrated.)
I remember my journalism teacher (Ben Rose was his name) telling me, "There's no money in community journalism. Everybody who thinks they're going to get rich on this had better leave now."
I remember my father asking (as he pulled out his wallet), "when are you going to get a real job?"
There may not be money in writing but, by gosh, there's pride. It's not like being a Wal-mart greeter, although there's nothing wrong with being a Wal-mart greeter – they get paid the same as reporters, they don't have to have a car and they get free uniform. Oh, please tell me it's free. It would be inhumane to make employees pay for that crap.
There's a certain cache to writing. When people at a cocktail party ask what you do for a living, you can say, "I'm a reporter." You know, say it all casual-like. Like you'd say when someone complimented your dress. "Oh, THIS old thing?" And you watch their eyes light up, suitably impressed.
Now that I'm not a reporter anymore, I don't get that same reaction.  I say, "I work in the production department of a newspaper," and they don't have a clue what the hell I'm talking about. They go all blank and nod politely and move on to the next person. They must think it's a factory or something. If I say, "I do ads," they think I'm in sales. If I say, "I'm a graphic designer," it sounds like I have a big head. No matter what I say, it's not half as cool as saying, "I'm a reporter." Or "I'm a writer." Saying the latter is like you're starring in a Nora Ephron movie. Or hanging out with Woody Allen. Which I would never do, even if he asked me, because he married his daughter.
Weirdo freak.
He's not even funny.
But I digress.
What I really want to say is that I have always been proud of my writing background and I have wondered if either of my two sons would take after their mother. I was rewarded richly tonight when Angus announced he had started a blog. A blog!
His topic is Tippy, his faithul pooch, who is not really an oaf. (OK, so she is a bit of an oaf. I'm sorry, Angus, she just is!!!)
I read everything he had written and laughed and smiled and beamed with pride! What an amazing son I have! I wanted to be the first to comment and be a follower but, alas, I couldn't figure out how to do it. (I'm sure that's why I have no comments on my blogs... no one could figure it out, right???? Right???? Anybody out there???? Hellllllllllloooooooooooooooo??? This would never happen to Julie & Julia but I guess she was saying something interesting. And I'm... not so much.
Sigh.
Anyway, if you ARE reading this, you must go to my son's website and admire his blog. Here's the website: tippyolliffe.weebly.com
He is a very talented child.
Just like his mother.
The photo features Angus and the inukshuk he made at Inverhuron Provincial Park last summer.
P.S. I have to start taking photos every day. This morning on the way to work the view along the river was so beautiful that I stopped the car in the middle of the road and just stared. The trees were laden with fresh snow, the river steamed and the sun's first light painted the tops of the evergreens with gold. I wish I had my camera. The first blizzard of winter is called for tomorrow. My kids are excited about a snow day. I'm just hoping that Dave and all family and friends get to work without incident. There's an excitement about the first bad storm of winter. Bring it on, I say. Our riverside cabin is warm and cozy and wonderful. Let it snow!
Posted by Cathy Olliffe-Webster at 10:22 PM