T is for Ti-Jean Goes West 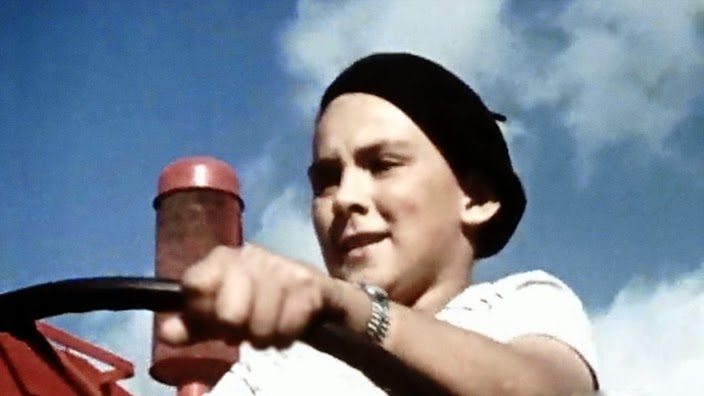 I was thinking about the National Film Board of Canada for the letter T, knowing of course, that it starts with an N, but still, the NFB is a treasure trove of Canadian film and I was sure to find something interesting that started with a T.

Sure enough, I found a little ditty called Ti-Jean Goes West, made in 1957 by a fellow named Raymond Garceau. I'd never heard of Ti-Jean before but apparently there was a whole series of Ti-Jean films and they were amongst the NFB's most popular titles back in the late '50s and early '60s. Ti-Jean (rhymes with dijon, like the mustard) was a 10-year-old French-Canadian kid who had magic powers, including the ability to run faster than a train, and this particular film was part comic adventure and part travelogue. In it, the cherubic faced youngster decides to hop on a train in Quebec and go out west. I thought, that's perfect! I live out west! Ti-Jean travelled out west!

Ever perfecter (shut up, spelling Nazis), the train in question was a Canadian Pacific, the company my engineer father worked for almost his entire life. Even perfecter than that, the engineer in the film is dressed exactly like my dad used to dress, right down to the striped jacket and cap! You can imagine my joy!

As the film progresses, Ti-Jean (who gets to drive the train, lucky bastard) (did I just say that? oops!) travels through my neck of the woods, beautiful northern Ontario with all its forests and lakes, before hitting the great, wide-open plains of Canada's bread basket.

He gets a job with Farmer Fetterman by showing off his amazing strength. How many kids can lift a one-ton farm implement, with his bare hands, without even farting? Ti-Jean can! So he gets a job harvesting wheat.

Mrs. Fetterman is so impressed her pancakes quiver.

The narrator says, "Ti-Jean can hardly wait to see Mr. Fetterman's combine at work." (Is that weird or is it just me?)

Now I'm reminded of life at my grandparents' farm, the harvest, the McCormick combine, the broken equipment, the oncoming rain – oh, the drama! But it's Ti-Jean and his little black beret to the rescue!

"Bring me a scythe," says Ti-Jean, looking at a field of oats as big as the eye can see. Ti-Jean's arms work 1,000 times faster than the farm equipment. The farmers can't believe their eyes as the camera moves in fast motion, then the bereted superhero jumps on top of the combine and drives it like a born harvester. He's determined to outwit the storm! Oh, the excitement! What will happen? Look! Ti-Jean even has the beginning of a moustache on his prepubescent lip! What a stud-muffin!

This movie is the kind of film we watched on those old projectors in public school, when the teacher was off sick and a substitute dug out NFB classics to occupy us kids until the bell rang. It's tacky. It's cheesy, it's corny – it's all the food groups! And yet, it has a remarkably Canadian charm that puts a ridiculous smile on my face.

Is there a happy ending to the Ti-Jean story? You'll just have to watch it to find out!

P.S. There are some fabulous short films on the NFB site. The animated ones, in particular, are wonderful. If you have time, check 'em out!

Posted by Cathy Olliffe-Webster at 2:56 PM

Email ThisBlogThis!Share to TwitterShare to FacebookShare to Pinterest
Labels: A to Z Blogfest, Ti-Jean Goes West