U is for Under the Weather 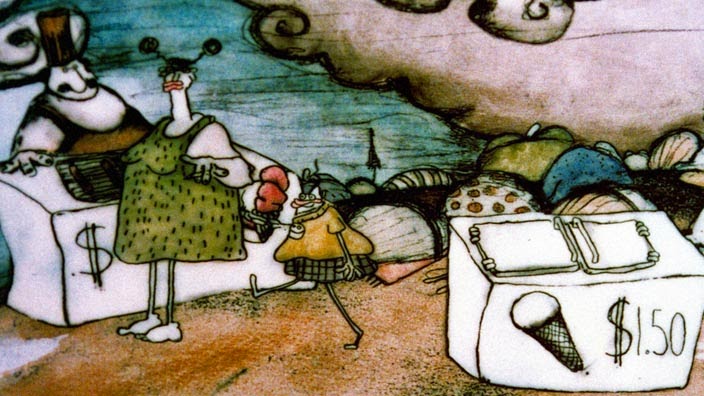 No, not me. Gawd. I am so sick about writing about being under the weather but not as sick, I am sure, as you are hearing about it.

Nope, Under the Weather is another gem I unearthed in the National Film Board archives. (You seriously need to check them out.) When I think of the NFB, I inevitably think about the zany animated shorts the board is famous for, films like: The Cat Came Back, the hilarious Oscar-nominated cartoon based on the folk song of the same name; Log Driver's Waltz, the addictively silly song by Wade Hemsworth about loggers and their gals dancing on logs in whirling swirling waters; My Financial Career, a drily hilarious cartoon based on a classic Stephen Leacock story; and one of my favourites, another Wade Hemsworth song called Black Fly. Oh, and I can't go away without mentioning The Big Snit. Fecking FUNNY and weird in equal measures.

Speaking of weird, Under the Weather is one of the weirdest cartoons I've ever laid eyes on. It's NFB-weird the way I expect NFB films to be weird. You just don't see stuff like this anywhere else in the world. It's as uniquely Canadian as that Ti-Jean movie I wrote about under the A to Z T-category.

You might not have had time for Tie-Jean, but take a few minutes to enjoy Under the Weather. It's worth it for two reasons: the bizarre sound of the people talking, and the man-boobs.

You just don't see stuff like that anywhere else ...

Under the Weather by Tali, National Film Board of Canada

Posted by Cathy Olliffe-Webster at 4:38 PM

Email ThisBlogThis!Share to TwitterShare to FacebookShare to Pinterest
Labels: A to Z Blogfest, Man Boobs, National Film Board, Under the Weather